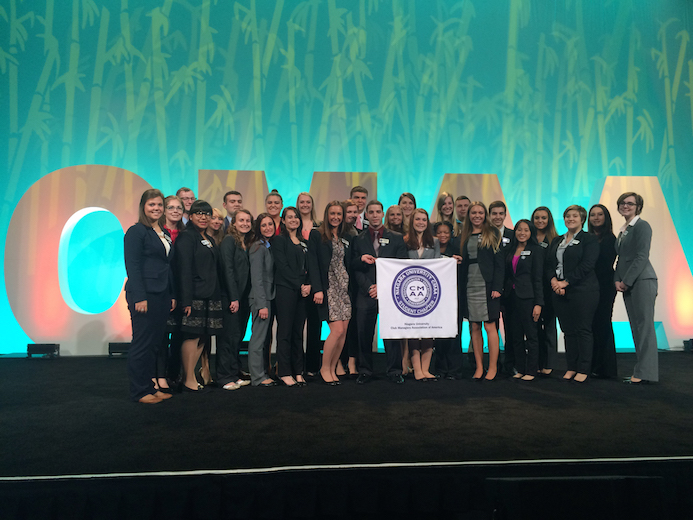 On Feb. 22, it was named CMAA Student Chapter of the Year for the seventh consecutive year. The student organization was selected among 55 other chapters in the nation based on a series of factors, including the number and variety of educational programs offered, member employment and internships in clubs, membership growth, its relationship with the state chapter of CMAA, and member attendance at events. The Niagara University student chapter has won this award every year since 2008.

Additionally, the Niagara University student chapter won two of the five possible Club of the Future competition first-place awards, winning in the Membership Classifications and Club Concepts categories. The student chapter was also recognized for meeting its membership recruitment goal for 2015 and growing its current enrollment to 28 members.

Students who join Niagara's CMAA are required to complete a rigorous schedule of educational and networking events, and work at a club each summer between academic semesters. Dr. William D. Frye, associate professor of hospitality and tourism management and student chapter adviser, noted these requirements, in addition to the chapter's significant membership growth and internship placements with top-rated clubs, helped the chapter win the title again this year.

"Our students are held to the same expectations and standards of private club managers who are currently working in the profession," Frye said. "This seventh consecutive award reaffirms the industry's viewpoint that the Niagara University student chapter meets and excels at those standards and is the hallmark of excellence in education and professional development for club management students. For these reasons, club managers purposely seek out Niagara University graduates to fill the management ranks at their respective clubs."

The Club Managers Association of America is the professional association for managers of membership clubs. With nearly 6,500 members across all classifications, its manager members run more than 2,500 country, golf, city, athletic, faculty, yacht, town and military clubs. The objectives of the association are to promote and advance friendly relations among persons connected with the management of clubs and other associations of similar character; to encourage the education and advancement of its members; and to assist club officers and members, through their managers, to secure the utmost in efficient and successful operations.

Since its establishment in 2006, the Niagara University CMAA student chapter has been designated by CMAA as the best student chapter in the nation for seven consecutive years, been conferred five Club of the Future first-place awards, and has had nine Club Foundation Joe Perdue Scholarships awarded to seven different members.

To learn more about Niagara University's College of Hospitality and Tourism Management, call 716-286-8279 or visit www.niagara.edu/hospitality.