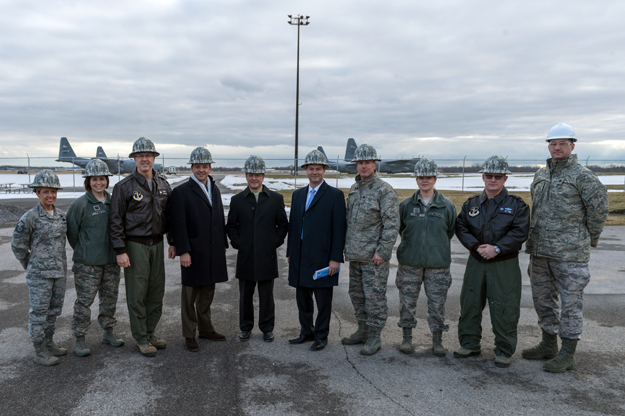 State Sens. Rob Ortt and Patrick Gallivan welcomed Sen. Tom Croci of Sayville to their districts Wednesday during a tour of the Buffalo and Erie County Naval & Military Park and the Niagara Falls Air Reserve Station Wednesday. The visit to the naval park and air base was a fist for Croci.

During their time in Niagara Falls, the senators toured the 107th Airlift Wing to learn about the capabilities of the MQ-9 Reaper. The Reaper mission, which is currently under construction, allows airmen to fly remotely piloted aircraft all over the world, right from the air base. 107th Airlift Wing Commander Col. Robert Kilgore and the senators discussed how the mission will help the base's sustainability. They also spoke about the importance of the base to the area and how much of an economic impact it has as Niagara County's largest employer.

"The Niagara Falls Air Reserve Station is an asset to the community and region as a whole," Ortt said. "Once completed, the MQ-9 Reaper mission will set the base apart, help to ensure its future and strengthen national defense efforts."

Croci chairs the Senate committee on veterans, homeland security and military affairs, where Ortt also sits on as a committee member. Both senators are veterans of the U.S. military.