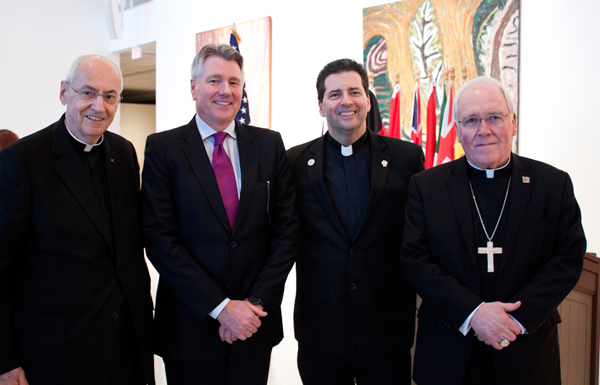 Niagara University announced today the creation of the Edward A. Brennan Center for Language, Culture and Leadership, which will endeavor to meet the needs of international families and students, and serve English language learners within the global community.

As another spoke of Niagara University's umbrella of outreach, the Center for Language, Culture and Leadership will embrace the richness of culture and language of Niagara's students, faculty and communities, and extend the university's Vincentian mission to agencies that serve refugee, migrant and immigrant populations.

It is also expected the center will cultivate leadership opportunities among both students and professionals in addressing global needs and providing innovative experiences for those preparing to be teachers of English as a second language.

"In keeping with our Vincentian identity, the Center for Language, Culture and Leadership will focus on leading, learning and serving," said the Rev. James J. Maher, C.M., president of Niagara University. "The portfolio of services and programs facilitated through the center will provide a continuum of English language learning. As part of the process, we will build interdisciplinary connections between teaching and learning that will augment services to international students and their families."

Maher noted the center will be a tribute to St. Justin de Jacobis, C.M., who served as a Vincentian missionary to Ethiopia from 1839 until his death in 1860. Despite significant opposition to his evangelization efforts in Ethiopia, de Jacobis founded a college and seminary, was ordained a bishop and is considered an apostle to Africa, and the founder of the Abyssinian mission. He was canonized by Pope Paul VI in 1975. His feast day is July 31.

The new center is named in honor of the father of Edward J. Brennan, a 1978 Niagara alumnus and current trustee who has been very active in serving the global community, largely through his work as co-founder and chairman of the Hand in Hand for Haiti charity. The retired CEO and chairman of DFS Group spearheaded the development of a world-class school in Saint Marc, an area that was ravaged by an earthquake in January 2010.

Niagara University students completed a seven-week internship at the school last September as part of a new collaborative initiative between the institutions. Edward A. Brennan served for many years as chairman and chief executive of Sears, Roebuck & Company. He also served as chairman of the board at Marquette and DePaul universities

Dr. Deborah T. Curtis will oversee the Center for Language, Culture and Leadership as its director, while an advisory council will be established to reflect an interdisciplinary approach to the development of English language learners. The advisory council will be comprised of university officials, faculty members and external stakeholders who work with international families in local communities and schools.

As part of her responsibilities, Curtis also oversees the Hospitality and Tourism Training Institute, a collaborative venture Niagara University formed last year with Catholic Charities of Buffalo that offers career preparation and placement for unemployed refugees. She previously led the university's Center for Events and Management Development and possesses an extensive background in both program development and working with international communities.

The primary goal of the center is to build upon academic and linguistic achievement to enhance proficiency among learners of English as a new language. In doing so, it will offer programs and services in six core areas: