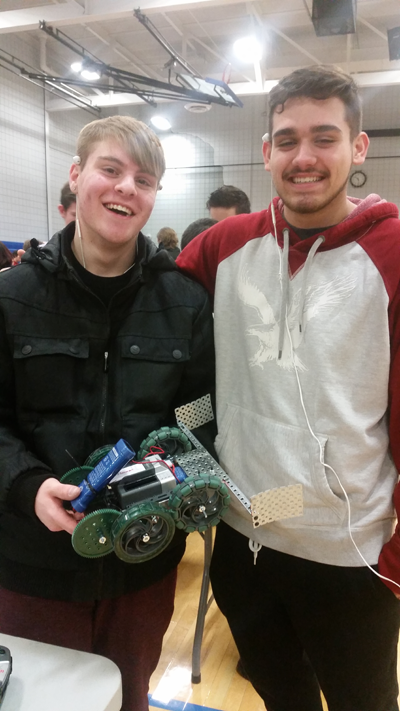 From left at Tech Wars: Nick Cabin and Chris Lewandowski.

Many high school and middle school students wonder how the material learned in many of their classes can be applied to the real world. Several technology teachers found the answer 20 years ago with a unique event called "Tech Wars."

The competition encouraged students to draw upon knowledge from different classes such as science and math, as well as technology. What they learned in the classroom helped them during events like bridge tension and "Vex." For the students, these events seemed like fun games.

For bridge tension, students were given specific parameters on how to build their bridges. Participants used small cuts of wood, mostly pine, to build their structures. No metal pins or any other materials were used that could give the bridge extra strength. Free weights were then used to test the strength of each bridge.

Students were supplied with the parts to make their robots for "Vex." The goal was to create a robot that was able to move foam balls from around the competition area into a predetermined corner.

"Basically, we push some stuff around and hope we get points for it," Tonawanda High School senior Nick Cabin said.

He and his friend and classmate, Chris Lewandowski, build their "Vex" robot in 10 minutes after their original robot failed to work.

While Tech Wars is meant to be fun for students, points were kept and a winner was announced at the end of the day. Thanks to increased funding to the technology department, Grand Island School District won the 2016 Tech Wars.