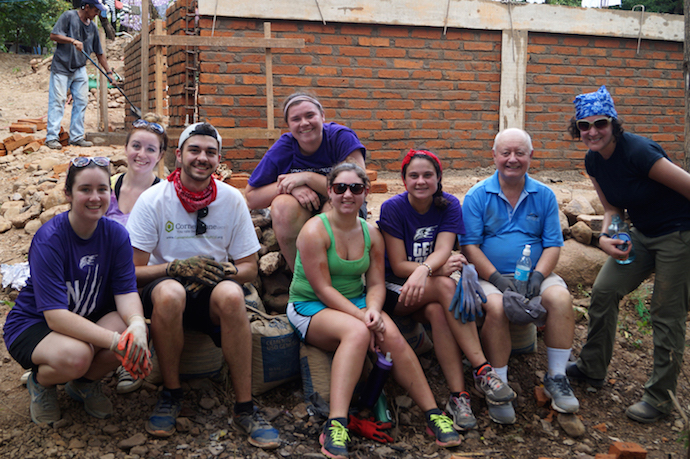 NU students, from left, Rachel Bailey, Amy Wnuk, Jake Eberth, Kelly Fitzpatrick, Briana Neale and Selena Cerra spent a week of their winter break building a home for a poor family in Nicaragua. They were accompanied by the Rev. Vincent O'Malley, C.M., and Dr. Abigail Levin.

Six Niagara University students recently returned from El Sauce, Nicaragua, where they spent a week during winter recess constructing a home for an impoverished family.

Rachel Bailey, Selena Cerra, Jake Eberth, Kelly Fitzpatrick, Briana Neale and Amy Wnuk - all members of the university's Bienvenidos Spanish and Hispanic culture club - joined forces with the 4 Walls Project service organization to build a home for a family that collects an annual of income of $1,200.

Fitzpatrick, the club's president, said the family the students were connected with had been living under a tarp that was attached to their neighbors' house. Their bathroom was a door-less hut situated above a hole in the ground, and they bathed and washed their clothes in the same river that was the source of their drinking water.

"The conditions in which this community lives are absolutely unimaginable, and any descriptions that I attempt to give cannot even begin to give a realistic impression of their severity," recalled Fitzpatrick, a native of Liverpool, New York. "We were heartbroken at seeing the way that they live, but these feelings are what sparked the Vincentian response in all of us."

By 8 a.m. each day, the students, their chaperones, a few masons and the family took on the tasks of making cement, moving bricks, forming rebar, passing and laying bricks, and filling in mortar. The masons told the students several times they were "como una máquina" (like a machine).

"The students are to be highly commended for their very physical work and delightful spirit," O'Malley wrote in an email during their stay. "Dr. Levin and I are very impressed by these students."

Truth be told, the students worked very hard just to get to Nicaragua. They began working with university leadership to obtain approval and identify the scope of the project about a year prior to the trip. Once those details were finalized, the group held several fundraisers to help pay their way to Central America, while footing a portion of the financial responsibility themselves. They arrived in Nicaragua on Dec. 16, motivated to build a safe, durable home for Carlos and Daisy, and their children, Neysi, age 7, and Derwin, 4.

Fitzpatrick noted it's uncommon for 4 Walls volunteers to see the completion of their projects before returning home. The students were notified on their first day in El Sauce they likely wouldn't see the house finished, which made it all the more satisfying when they laid the final brick on their last day of work. (The masons roofed the house later.)

With the family inside, O'Malley then offered a blessing of the structure. Carlos, the man receiving the house, thanked God for giving a chance for a better life to his children, and he thanked the students for lending a hand in this life-changing opportunity for him and his family. His wife, Daisy, who had worked tirelessly all week, began to cry. The group discovered this was her sixth time applying to get a home from 4 Walls.

The children also experienced a touch of an American Christmas, as the students presented them with stockings full of toys, books and school supplies. After dinner that night, the contributors enjoyed a Latin American-themed celebration as they took turns swinging at a piñata. It was a fitting sendoff for Bailey, Cerra, Eberth, Fitzpatrick, Neale and Wnuk, who headed back to the States the following morning.

"The hard work paid off, especially knowing that so many loving hands and hearts went into its success," Fitzpatrick said. "Seeing Derwin walk around the inside of the new house with a smile on his face and a stuffed Monte (Niagara University's mascot) in his hands was a real-life image of exactly what we were all feeling in our hearts. It was a reminder of the Vincentian mission and our call to answer it. It was a reminder that, even though there is so much injustice in the world, small acts can add up to change it, even if it is just for one person or family at a time."

"Niagara University has become my home, its students my family, its faculty and staff close mentors," added Cerra, of Scranton, Pennsylvania. "I have always loved being a Purple Eagle, but never have I appreciated it more than when I received an e-ticket to Nicaragua with my name on it. There are so many administrators, and faculty and staff members at this university who give their lives to making students' experiences better. These people have families and lives outside of NU, but give up so much of their time to students' experiences, my own personal experiences, (that make) life that much better."

Niagara University students contribute more than 1,000 hours of community service each week during the academic year through the Rev. Joseph L. Levesque, C.M. Institute for Civic Engagement and programs such as Learn and Serve Niagara and Brothers and Sisters In Christ.