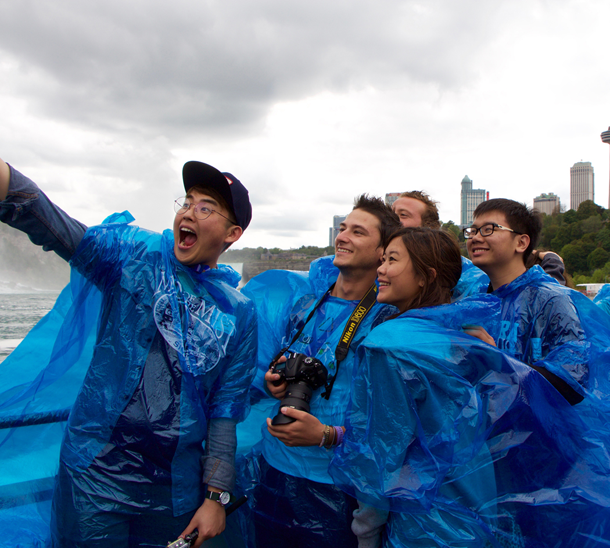 A Niagara University graduate student from Fichtenberg, Germany, recently won a statewide photo contest for a selfie he took while riding the Maid of the Mist in August.

Well, technically, it's a photo of a selfie being taken.

"One of the reasons why I love studying in the U.S. is because you do so much more than just studying, whether it is a game of Frisbee on campus, watching a game of our hockey team or taking part in the regular trips that are organized," wrote Schuett in explaining the context of his submission. "In the picture, you can see an impression from one of our trips to Niagara Falls, which was organized from the international relations team of Niagara University. We had a fun time and this snapshot represents this joy very well."

This was the first year that Study New York presented a photo contest for international students, which was titled "Why I Love Studying in New York." Awards were presented in four categories: campus, social/cultural, academic life and selfie. Several of Niagara's international students submitted photos, some of which were featured in the program for the Nov. 23 reception.

The mission of the Study New York consortium is to work collaboratively with its member colleges, universities and partners through special programs and global outreach to promote New York as the premier education destination for international students, researchers, visiting professors and other exchange visitors.

Niagara University instituted an office of international relations in July 2013. The recruitment of international students and faculty has been a priority of its president, the Rev. James J. Maher, C.M.