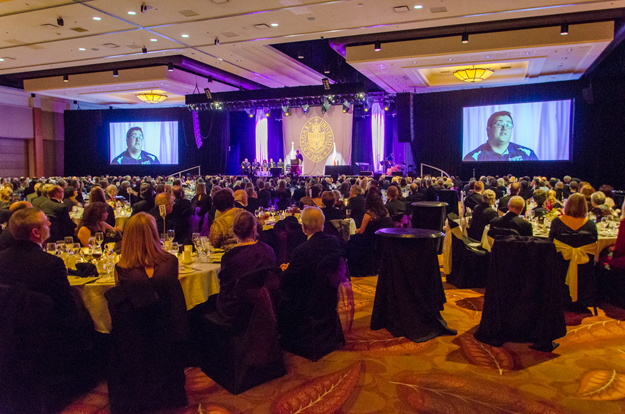 Niagara University's annual economic impact on the Western New York region is estimated to exceed $227 million. The Catholic and Vincentian institution is among Niagara County's largest employers and graduates nearly 1,000 well-qualified individuals into the workforce each spring.

Maher knows that arming more young people with postsecondary training is the foundation upon which success is built - for the students and the entire region. An educated workforce is a critical component of a healthy economy, and a healthy economy is vital to the success and prominence of Western New York.

It is for this reason that Maher has made access and affordability to excellent education hallmarks of his presidency, and why raising scholarship dollars - the impetus behind Niagara University's President's Dinner - has become more important than ever.

"Niagara University is poised to take on an even greater role in helping Western New York realize its full social and economic potential," Maher said. "We have aligned our institutional objectives to complement the goals of our elected officials and business leaders. By supporting the education of our students through financial aid, we can be the engine that produces more dynamic and transformational leaders who will help frame the future of Western New York."

This year's President's Dinner will take place Friday, Nov. 13, at the Seneca Niagara Casino Hotel and Event Center. The event begins at 6 p.m. with cocktails and includes awards presentations, dinner and music. "Business attire" is welcome.

For more than a decade, the President's Dinner has generated scholarship funding to benefit Niagara University students. During the 2014-15 academic year, 98 percent of undergraduate students received scholarship assistance from the university that totaled nearly $42 million.

Four individuals known for their extraordinary professional success and remarkable community philanthropy will be honored during the event:

Pamela R. Jacobs-Vogt and Marsha Joy Sullivan, both members of the university's board of trustees, are serving as the dinner's co-chairs. The Rev. Joseph L. Levesque, C.M., president emeritus, will serve as honorary event chair.

Tickets for the President's Dinner are $175 per person and may be reserved at www.niagara.edu/PresidentsDinner. Ticket and sponsorship information is also available by contacting Niagara University's Office of Institutional Advancement at 716-286-8778 or [email protected]. Tickets will not be available at the door.