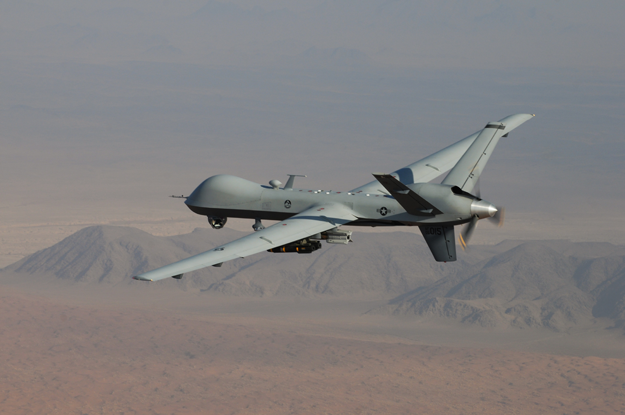 Members of the wing have been involved in other MQ-9 missions, but this was the first time 107th personnel controlled all aspects of the mission - from flying the aircraft to providing support in the mission operations center.

Twenty-three members of the wing participated in the three-day mission.

The location where the flights took place is classified.

The MQ-9 has an aircrew that consists of a pilot, sensor operator and a mission intelligence coordinator. They flew missions in which 107th members owned the full command and control, mission execution and reporting responsibilities.

"This was a seamless integration with the Ellsworth AFB Operations Group. Thanks to the teamwork of the 107th, we were able to deploy, execute and redeploy 23 folks to support the RPA enterprise. Everyone hit the ground running, supporting coalition forces with zero degradation to mission execution, an outstanding effort from our airmen," said Lt. Col. Gary Charlton, commander of the 107th Operations Group. "The deployment to Ellsworth furthered our relationship with them and was a great team-building mission for airmen."

Now, over a year into the transition, many airmen have cross-trained into new career fields. They are providing manpower and applying their specialized training.

For now, the MQ-9 aircrew travels to bases across the U.S. that have the facilities to remotely fly the RPA.

They are providing air support for coalition forces overseas and engaging the enemy. The MQ-9 is in high demand in the Area of Responsibility in southwest Asia.

Work began in September on the operations building, which is in the first phase of construction, to be completed in 2017. Then the 107th will be "initial mission capable," ready to conduct combat missions from Niagara Falls.

"We are 16 months into our three-year conversation and now doing combat operations," said Col. Robert Kilgore, 107th Airlift Wing commander. "It's a team effort here at Niagara and we all have a big part in the missions."

The MQ-9 Reaper is an armed, multi-mission, medium-altitude, long-endurance, remotely piloted aircraft that is employed primarily as an intelligence-collection asset and secondarily against dynamic execution targets.

Given its significant loiter time, wide range of sensors, multimode communications suite and precision weapons, it provides a unique capability to perform strike, coordination and reconnaissance against high-value, fleeting and time-sensitive targets.

The members of the 107th are becoming accustomed to the sounds of construction. The medical facility was recently reopened after a yearlong renovation.

The 107th has a long history of being mission-ready to perform operations. Members of the 107th have deployed in support of many world contingencies and operations, such as Strong Resolve, Uphold Democracy, Enduring Freedom and Iraqi Freedom.

In addition to its federal mission, the 107th, New York Air National Guard, has a state mission to provide equipment and personnel as directed by the governor and Division of Military and Naval Affairs. The unit responded to Hurricane Irene in 2010 and again to Hurricane Sandy in 2012.

Most recently, the unit was activated to support Operation Lake Effect when the western region of New York state was hit with more than 7 feet of snow. The unit deployed its assets and conducted domestic operations to help the area and mitigate the hardships to local communities.