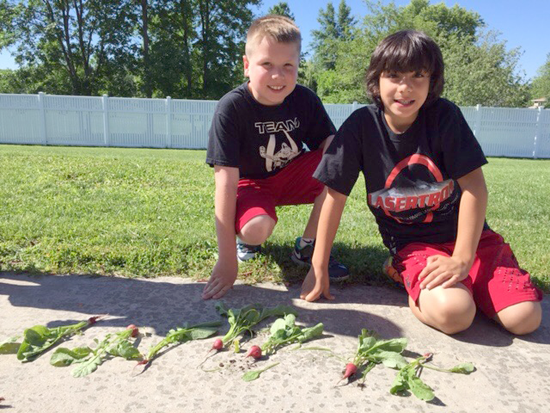 Joey Muni and Anthony LaGreca show off their radishes at the Rainbow Garden at Errick Road Elementary School. (Contributed photos)

More than 100 fourth-grade students from four classrooms at Errick Road Elementary worked together this year to plant an organic vegetable garden that they dubbed "The Rainbow Garden."

"We were inspired by Mel Bartholomew›s book, 'Square Foot Gardening with Kids,' said teacher Brooke Harris. "We decided to divide our two raised garden beds into square foot sections so each student could have their own tiny garden."

The students read about the requirements of different vegetables, including how long they would take to germinate and harvest, how much space between seeds and how deep each seed should be planted, and then decided on two to plant. Before the students got busy with planting, they were lucky enough to have Ryan Henry of Henry Services Inc. in Sanborn donate a truckload of new compost and peat moss to perk up the soil in the 9-year-old garden.

The students started by measuring the garden edges and marked off each square foot. Then they created a grid with twine. The week after Memorial Day, each fourth-grader chose two squares and designed a marker with their name on it, and then got busy planting cucumbers, radishes, tomatoes, lettuce, beans, carrots and marigolds. Trips were made to weed and water using rainwater that the students had collected.

"In June most of the seeds had sprouted and the students were thrilled to see how fast the plants were growing! Students were able to harvest some radishes and lettuce on the last day of school and proudly wrapped up their veggies to show off at home," Harris said.

Throughout the summer, the soon-to-be fifth-graders have been stopping by to check on their plants and pick any vegetables that are ready.

"I have encountered a few students and their families recently and the students are so excited about how much their plants have grown," Harris said. "I noticed many families have posted photos of their visits on their Facebook pages.

"It's been a great project on some many levels. The students were able to practice science and math (measurement) in a real world context and complete a hands-on investigation of what plants need to survive and thrive. They gained a better understanding of the lifecycle of a plant, the importance of a plant's structure to its survival, the connection between plants, animals and their environments, how humans can shape, protect and preserve the environment they live in and the ecosystems of animals, observe that plants get most of nutrients they need from the air and water and understand that the energy from the sun makes its way through the food web to people. And as students harvest and eat the veggies they grew they are also learning to make healthy choices about the foods they eat." 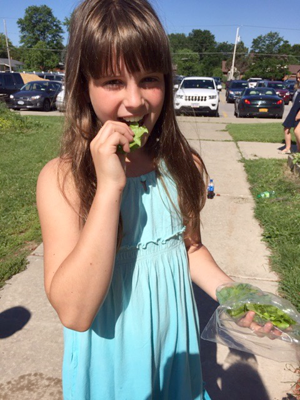 Sophia Patterson enjoys the fruits of her labor.