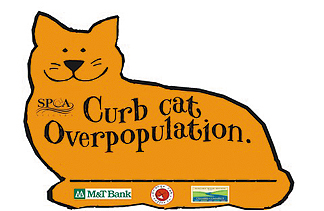 The Niagara County SPCA has teamed with the Orange Cat Coffee Co. and M&T Bank to unveil a new effort aimed at curbing the cat overpopulation problem in Lewiston.

Set to begin July 15 and continue for one-and-one-half months, the campaign's purpose is to engage Lewiston merchants and the community in an effort to collect funds devoted entirely to the spaying/neutering of feral and stray cats.

Milligan offered statistics showing an unspayed female cat, her mate and their offspring have a potential of producing an average of 2.8 surviving kittens per litter. At a rate of two litters per year, it adds up quickly, she said.

It costs the SPCA $75 to spay/neuter a single cat. Included in that cost, in addition to the sterilization, is a rabies vaccine and a distemper vaccine, flea control and a de-wormer.

"Every cent raised through this endeavor will be dedicated to the control of cat overpopulation in Lewiston, so that there will be no charge to the residents of Lewiston," Milligan said.

Each participating business will receive a letter-size informational acrylic display that will describe the campaign and how patrons can assist in the effort. The SPCA is providing businesses a stack of half-sheet paper orange cats for customer donations. Those who donate a dollar to the campaign (or choose to round up their bill to $1) will be given an orange cat on which they can write a name. The paper cat will then be displayed on the merchant's wall.

Each merchant will retain the donations in a separate secure area throughout the time period for the SPCA. Throughout the campaign and at its conclusion, those funds will be collected and counted.

Milligan said the SPCA would disclose the accumulated amount of the donations to the community. It will also provide assistance to those interested in curbing cat populations in the area.

"We will then lend traps to interested parties. We will also be available to walk people through the process," Milligan said. "It will be the responsibility of the residents to trap and transport the cats to the NCSPCA, where they will be sterilized and receive the aforementioned medications. Participants will also need to pick the cats up from the shelter and then release them back into the area where they were initially trapped. There will be no charge for this service."

"We do have a few volunteers in Lewiston who are willing to assist with trapping and transporting," she added.

For more information on participating in the campaign, contact Milligan at 716-713-1093 or email [email protected].