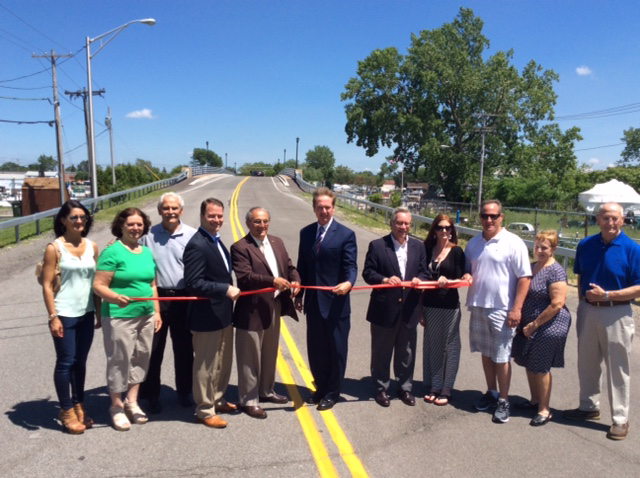 North Tonawanda Mayor Arthur G. Pappas, Congressman Brian Higgins, State Sen. Rob Ortt and Assemblyman Robin Schimminger joined other local officials and members of the community for a ceremony Monday rededicating the Frederick B. Durkee Memorial Bridge, which is the only access to Tonawanda Island from River Road in the City of North Tonawanda. The Durkee Bridge is the only bridge structure owned by the City of North Tonawanda, and just completed a $2.4 million rehabilitation project with many significant improvements.

Originally built in 1967, the bridge was named in memory of Frederick B. Durkee, mayor of the City of North Tonawanda, who died in office in 1966. The bridge spans 504 feet with five-span multi-girder beams, which have a unique construction of having the only riveted weathering steel construction in Western New York. The bridge carries two lanes of traffic with sidewalks along both sides.

The bridge was in significant need of repair, and the improvements made through this project included: complete rehabilitation of the structural deck and curbs; replacement of the pin and hanger plates and added redundant structural supports; replacement of deteriorated structural steel; joint replacement; abutment bearing replacements; and concrete repairs to the abutments and piers.

"Significant infrastructure investments like this one in North Tonawanda support local jobs during the construction phase and enhance access and opportunity for the community and business districts for years to come," Higgins said. "The Durkee Bridge project was made possible thanks to great collaboration between federal, state and local partners."

"Our communities deserve infrastructure that's reliable, dependable and, most importantly, safe," Ortt. "This re-dedication ceremony is a long-overdue tribute to one of our great mayors in one of the best cities.

"Reconstruction on the Durkee Memorial Bridge started a few years ago when I was the mayor, and I'm glad to finally celebrate its completion under Mayor Pappas. Because of the collaborative effort of all levels of government, this bridge will serve as a symbol of the city's forward momentum for all residents, businesses and visitors to enjoy for many years to come."

"The work completed on this significant infrastructure project for the city will extend the service life of the bridge by at least 30 years," Pappas said. "This bridge serves as the only conduit to Tonawanda Island and is critical for the businesses today and the opportunity for growth in the future."