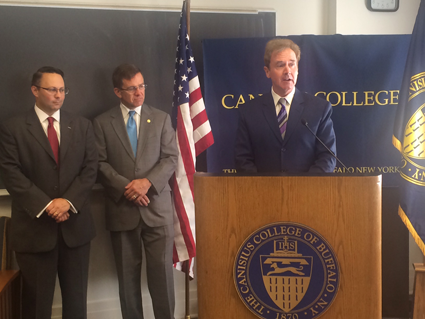 Legislation would remove time limits for veterans to use G.I. Bill education credits

Congressman Brian Higgins, D-NY-26, was joined by veterans in the Canisius College Office of Veterans Services in Buffalo to announce the Veterans' Education Flexibility Act. The bill would remove the time limits veterans have to use the education benefits earned from their service.

"Supporting our veterans means much more than thanking them for their service," Higgins said. "This bill would allow our nation's brave soldiers to take full advantage of the educational opportunities they deserve, without time restrictions. Veterans returning home from putting their lives on the line for our country should have flexibility and support when seeking an education."

Higgins noted the veteran's path to higher education is not always straightforward. Many postpone obtaining a degree to join the workforce, take care of families or to seek treatment and rehabilitation for service-related injuries. A 2010 study by the Veterans' Administration found 21 percent of veterans had not used their education assistance because their period of eligibility had expired.

The legislation would allow service members and veterans who were eligible for the Vietnam Era Veterans' Educational Assistance Program (VEAP), Montgomery GI Bill - Active Duty (MGIB-AD) or Post-9/11 GI Bill to get the education and job training they have earned - at a pace that makes sense for today's workforce. Education credits can be put toward college, technical and vocational programs.

U.S. News and World Report ranked Canisius among the top institutes of higher education for military veterans. Canisius earned the seventh spot among 49 regional universities in the north on the "Best Colleges for Veterans" ranking for 2015. This is the third consecutive year the college has been in the top 10 in this category. To be considered for this ranking, schools must be certified for the GI Bill and designated as a "Yellow Ribbon School" by the U.S. Department of Veterans Affairs.

A number of other local colleges and universities also have programs and services that welcome veteran students.

June 22 marks the 71st anniversary of the day President Franklin Delano Roosevelt signed the G.I. Bill, formally known as the Serviceman's Readjustment Act. June 30 will be the seventh anniversary of the Post 9/11 GI Bill, which Higgins supported.

More information on education benefits available to veterans can be found at http://www.gibill.va.gov/.