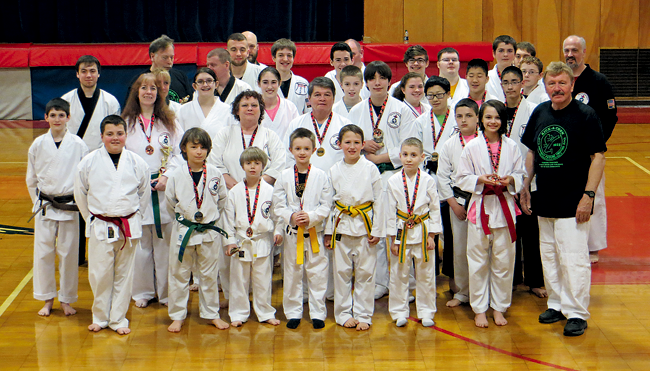 Story and photo by Danny Maerten

Niagara Catholic High School was the place to be on Saturday, April 18, to watch the students of Project Future Center preform their annual Kick-A-Thon.

This annual event is the center's major fundraiser. Each participant procured pledges per kick or a donation prior to the event. Then, on Saturday morning, the participants began the execution of various martial arts kicks and stances, earning the pledges.

The revenue raised helps fund the Project Future Center, as well as many other community outreach programs. Special drills and skills were also performed to the delight of the spectators.

"Top Kick" awards were given to the teams and/or individuals raising the most donations and pledges. Third place went to the grandmother-grandson team of Donna Robins and Ayden. Second place was awarded to the mother-son team of Bev Fillinger and Billy. The first-place trophy was presented to team Delporto, consisting of Chloe Tonellato and her grandfather, a Mr. Delporto.

Rev. Heisner, the Project Future Center's founder, director and instructor, bestowed Delporto with New York Yankees paraphernalia for all the years of supporting the Center and its programs.

Sidion Mills received the Inspirational Award, which is given to a new student with devotion, caring and giving to the program.