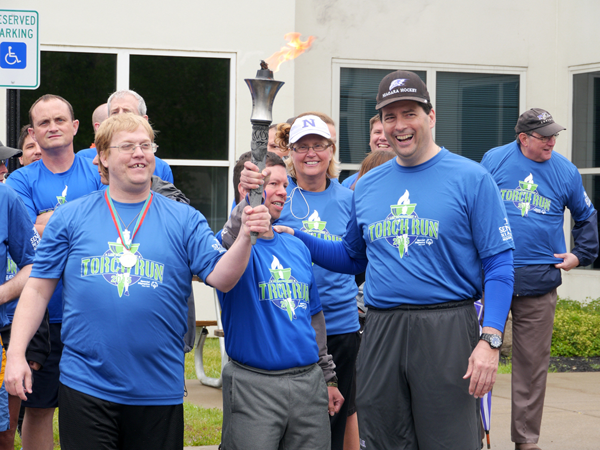 Participants, led by Maher, carried the "Flame of Hope" through the streets of Lewiston, commencing at the Kiernan Center and ending at the Red Brick Municipal Building in the village.

At race time, Niagara University had raised the most financial support of any team participating in the Buffalo leg of the event.

Last year, Maher became the first university president in the Western Region to ever participate in the Law Enforcement Torch Run.

Through its partnership with Special Olympics, Niagara University offers coursework to prepare coaches; as a result, NU has hosted an annual Special Olympics basketball tournament in its Kiernan Center.

Niagara's College of Education offers bachelor's and master's degrees programs in developmental disabilities, with embedded internship experiences that position candidates for career opportunities in the field. Both programs were developed in collaboration with community-based agencies that serve young adults and adults with disabilities.

In September 2010, Niagara was the only institution awarded a $650,000 grant from the New York State Developmental Disabilities Planning Council to develop and conduct a statewide disability awareness and sensitivity curriculum and the corresponding training tools for first responders.

The grant allowed David Whalen, a sought-after expert who provides training to police and fire departments in other states, to facilitate the establishment of a first responder disability awareness training program at Niagara, which provides training throughout the country.

In 2009, Niagara partnered with Opportunities Unlimited of Niagara to offer the transition readiness for employment in the community program, which endeavors to assist individuals with intellectual and other developmental disabilities to accrue the skills necessary for community-based employment.

This program has since been extended to integrate experiences on campus with both Opportunities Unlimited and Niagara Cerebral Palsy, providing abundant chances for NU students to learn about and work with individuals served by those rehabilitation agencies.

Special Olympics is the largest amateur sports organization in the world, comprising more than 4.4 million athletes with intellectual disabilities in 170 countries. Nearly 65,000 Special Olympics athletes compete in a variety of Olympic-style sports in New York, making the state program the largest in North America.

Additional information on the Special Olympics can be found at www.specialolympics.org.