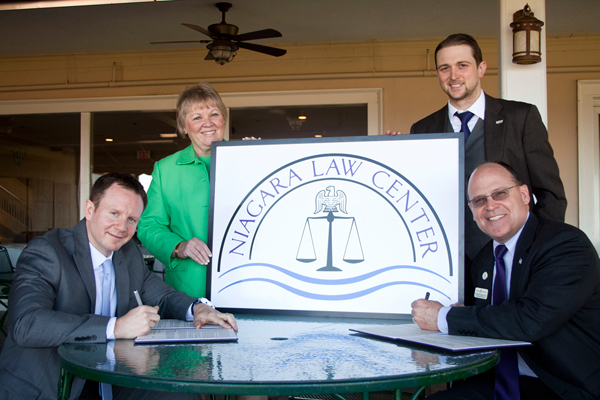 On May 1 - Law Day - the provost of Niagara University and the president of the Bar Association of Niagara County met at the Niagara Falls Country Club to officially establish the long-awaited Niagara Law Center.

Dozens of local judges, lawyers and court staff were in attendance for the Bar Association's annual Law Day Luncheon, which provided the ideal backdrop for the ceremonial signing of the cooperation agreement made between the university and the bar association.

"I believe this collaboration gives us a unique ability to provide affordable, top-notch continuing legal education to practitioners and professionals in Western New York," said Bar President Matthew Mosher, who signed the agreement on the country club's porch overlooking the Niagara River gorge.

While the May 1 signing between Mosher and Niagara University Provost Dr. Timothy Downs made the formation of the Niagara Law Center official, the collaboration had already been operating since earlier in the year. In March, the NLC hosted its first continuing legal education course on the university campus, bringing lawyers and jurists - including the Niagara County district attorney - to a six-hour criminal procedure practicum.

"Niagara University is extremely excited to engage in this partnership with the Bar Association of Niagara County," Downs said. "We anticipate that the CLE partnership will provide exemplary and timely learning opportunities for all individuals working in law professions in Western New York."

Just last week, the NLC hosted a two-day collaborative matrimonial law training at the university. While that course cost attendees $350 and provided 13 CLE credits to attorneys, an upcoming one-credit seminar on May 20 will cost guests just $45 and includes a full-course dinner at Danny Sheehan's Steakhouse in Lockport.

"There really are no parameters on the variety of quality CLEs we expect to offer," NU CLE Program Director Ryan Thompson said. "In the fall, we're already looking at potential topics, including tribal law and casinos, border patrol and customs, and even perhaps an in-depth look at Sir Thomas More's trial."

Thompson noted this year's Law Day was celebrated by lawyers and courts across the nation in conjunction with the 800th anniversary of the Magna Carta's creation in England. It seemed especially fitting, Thompson said, that this collaboration between an academic university and a professional bar association was made official at such a celebration.

It was by no accident this year's keynote speaker at the luncheon was chosen to be Niagara University professor Dr. Stefanie Wichhart, who is a historian rather than an attorney. The professor's speech provided the lawyers and judges in the crowd with a lesson on Magna Carta's interesting and somewhat turbulent past.

For more information on the Niagara Law Center, call Bar Association of Niagara County Vice President Patricia McGrath at 716-438-7575, or Thompson at 716-286-8324, or visit www.niagara.edu/cle.