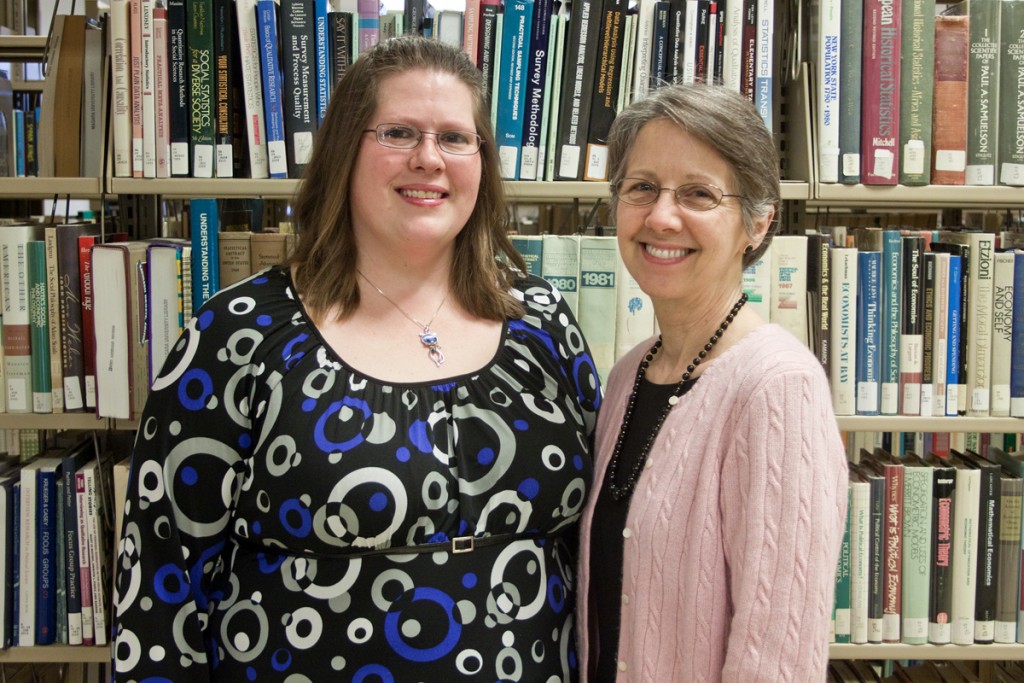 Niagara University senior Kimberly Kennedy, left, is the 2015 recipient of the Ethel F. Lord Fellowship Award in gerontology, an honor she was nominated for by Dr. Susan Mason.

"Nontraditional" doesn't even begin to describe Niagara University student Kimberly Kennedy. The 32-year-old senior has already withstood more trials than many people endure in a lifetime.

Kennedy grew up in Centralia, Washington, without the presence of a father. When she was 13, her mother was brutally murdered, leaving Kennedy and her sister without biological parents. Still, she graduated high school with honors in 2001 "to show the world that children of parents who suffered from drug dependency were not doomed to the same fate," she said.

After high school, Kennedy owned and operated a prosperous bakery and café in Onalaska, Washington, again to prove a young woman could play a successful hand even with the deck stacked against her.

Given the tragic circumstances that beset Kennedy at a young age, she was essentially raised by her grandparents, which helped her to develop a connection with and compassion for older individuals. Kennedy's grandmother, Shirley Kelly, became her de facto mother and best friend. It was Kelly who taught Kennedy to work hard, support herself and never give up on her dreams.

"I wouldn't be the woman I am today without the love and support of my grandparents. They believed in me even when I doubted myself," Kennedy said.

She moved to Western New York in July 2013 with her husband, Jason, who is from Newfane and worked at Niagara University for a brief period. She transferred to NU to pursue a double-major in psychology and gerontology, along with a double-minor in women's studies and statistics. Studying gerontology was originally a way of thanking her grandparents for their selflessness. Kennedy said she was committed to arming herself with an outstanding education that could help her change the lives of those around her.

Enrolled in NU's 4+2 clinical mental health counseling program, Kennedy will shift seamlessly into full-time graduate study this summer. When she graduates with a master's degree, Kennedy intends to practice counseling in an environment that services the needs of the elderly, most likely in a nursing home setting. She said she hopes to play a part in developing new technology and programs that soften the aging process.

"I hope that, in my career, I can make a difference in the lives of the people that I work with," said Kennedy, who recently completed an internship at Our Lady of Peace nursing home in Lewiston. "I want to give back to the community, especially the elderly, for all the love and support that I received from them when I was a child. I hope to develop a system within nursing homes that makes them a better place to be and not something to dread. As a professional woman, I want to fill the lives of others with hope."

It is this mindset, coupled with exemplary academic performance, that led the North Atlantic Region of Soroptimist International of the Americas to present Kennedy with the Ethel F. Lord Fellowship Award in the amount of $5,000. The honor, granted to an "outstanding graduate program candidate in the field of gerontology," will be bestowed on Kennedy during a luncheon next month in Gettysburg, Pennsylvania.

Proceeds of the fellowship must be used by for tuition, books, equipment and other things required by the curriculum to attain the currently pursued advanced degree. Fellowship applicants must demonstrate scholastic excellence and financial need.

Kennedy learned she had won the fellowship March 19, her 32nd birthday.

"I see Kimberly as an ideal candidate for the Ethel F. Lord Fellowship," wrote Mason, also a member of Niagara's psychology faculty since 1979. "She is dedicated to working as a geriatric mental health counselor, so that she can help improve the lives of older adults. Kimberly is very bright, hard-working and compassionate; and she has demonstrated a commitment to gerontology and to women's issues. There is no doubt in my mind that Kimberly will succeed in her graduate studies and in meeting her career goals."

Soroptimist is an international organization for business and professional women who work to improve the lives of women and girls in local communities and throughout the world. According to its website, almost 95,000 soroptimists in about 120 countries and territories contribute time and financial support to community-based and international projects that benefit women and girls.

Kennedy is eager to inspire women, particularly those in their golden years.

"I want to help people - that's who I am and that's what I enjoy doing. I believe that there is not enough support for individuals as they surpass retirement age. We are living in a society where many people only care for themselves and never try to make the lives of others around them any better. Society no longer respects its elders and instead puts them in homes where their dignity, independence and well-being are tossed aside, and they eventually become forgotten. It's time for a change, and I know that someday I will be a part of that movement."

Additional information on the 4+2 program in clinical mental health counseling can be obtained at 716-286-8328 or www.niagara.edu/mental-health-counseling.