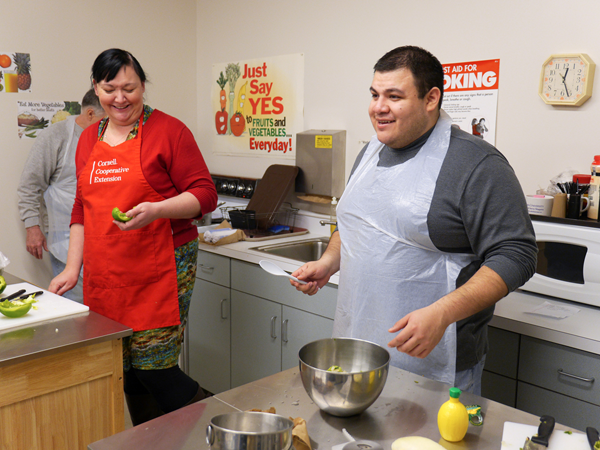 If you blinked, you probably missed David Serrano. The quiet-but-affable Vincentian seminarian wrapped up a 33-day stay at Niagara University March 2.

Serrano was on Monteagle Ridge to perform one month of apostolic mission work, a requirement of the internal seminary process (formerly referred to as the novitiate) to become a member of the Congregation of the Mission.

Under the pastoral care of the Rev. William Allegretto, C.M., Class of 1981, Serrano shared in community living in the university's Vincentian residence. He said he particularly enjoyed engaging with Niagara students, opportunities that arose during meals, classes (when he would serve as a guest speaker) and after Sunday night Masses.

"I think you are awesome!" Serrano exclaimed during a 45-minute conversation on a brisk February afternoon. "Unlike the winter weather, the people here are very warm. There is something at NU - and I think it's the people - that makes you really feel at home, really welcome. That's what I felt right away when I came here."

Serrano lived in a guest room in Niagara's Vincentian residence. He fit right in with the Vincentians through participation in daily communal activities. He was present for house meals and celebrations with different groups of people. It was almost as if Serrano had always been there, according to Allegretto.

Most of Serrano's weekdays were dedicated to assisting at the Heart, Love and Soul food pantry and dining room in downtown Niagara Falls. There, he would serve guests breakfast and lunch from 8:30 a.m. until 1:30 p.m., and provide numerous "as-needed" services, such as stocking the pantry, surveying guests, cleaning, retrieving food donations, even translating. By all accounts, Serrano's authentic guacamole was an HLS favorite, almost as popular as his relentless work ethic and disarming personality.

"When I first met David, I was impressed with his quiet and unassuming demeanor. As time passed, I found that my first impression remained true, yet I also experienced his quick wit and delightful sense of humor," noted Sister Beth Brosmer, executive director of Heart, Love and Soul. "David pitched-in with just about everything. This included food prep, serving meals, unloading trucks, stocking groceries and cleaning. Mostly, though, I will remember the way he listened with his heart to the stories of our guests. It was a pleasure to have David at Heart and Soul, and we wish him many blessings in his ministry."

Serrano's journey to the Vincentian priesthood began in Veracruz, Mexico, where he was born and lived until middle school. His family moved to Gastonia, North Carolina, in 2001, and became members of Our Lady of Guadalupe in Charlotte - the only Catholic parish in the area that conducted all its Masses in Spanish.

It was at Our Lady of Guadalupe that Serrano first encountered the Congregation of the Mission. The Vincentians offer numerous outreach programs within the Hispanic community near Charlotte, including catechism, food pantry assistance and raising funds for those in need.

As a church youth group leader, Serrano got to know the Vincentians and developed a mentor-mentee relationship with the church's pastor, the Rev. Vincent Finnerty, C.M. After graduating from high school, Serrano decided to enter the discernment house and live in community with the priests there. He also was attending community college.

"I saw guys who were living simply and were very happy with what they were doing," Serrano said. "I saw that they were simple men living and working together - and they were happy. They were genuinely happy with their ministry. I said (to myself), 'I think I can do that.' "

Serrano spent one year in the discernment house before leaving, at the request of the Vincentians, to ponder whether or not the priesthood was for him. For the next five years, he landscaped, cleaned professional offices, worked in the promotions department for a local Hispanic radio station and even performed as a clown.

"I know some pretty good mind tricks and can make a few balloon figures," Serrano joked.

Still, something inside him was pulling Serrano toward the priesthood. He moved to Queens, entered the Vincentian formation and enrolled at St. John's University to study philosophy. Once he earned his bachelor's degree, he was off to Germantown, Pennsylvania, to commence the internal seminary process, part of which requires each candidate to perform one month of apostolic mission.

That's where Niagara came in. Serrano chose to come to Western New York in February - yes, you read that correctly - to work with the Vincentians on and around Monteagle Ridge. He was originally scheduled to arrive Jan. 26, but weather-related delays pushed his arrival back two days.

Serrano's plane landed in Buffalo on a Thursday evening. The next day, he was working diligently at Heart, Love and Soul with 2009 NU alumnus Mike Daloia, who manages operations and personnel at the food pantry.

"I think the experience at Heart, Love and Soul and the St. Vincent de Paul Thrift Store really opened David's eyes to the needs of the area, especially the poor and homeless he was serving," Allegretto said. "Having lived in New York and Philadelphia, he didn't fully understand that Niagara Falls faces many of the same challenges as those larger cities."

Allegretto said the 28-year-old Serrano was an exceptional role model for Niagara students, having observed Serrano speak during a religious studies class and on several other occasions. "It was wonderful for them to have this young person so involved in religious life," Allegretto said. "David is a powerful witness, even to his own confreres."

Although Serrano has returned to the Philadelphia area, the month-long imprint he made at Niagara is sizeable. Several people have expressed a desire to see him back on campus once he completes the internal seminary process in July.

It sounded like Serrano, as an aspiring Vincentian, would certainly be open to the idea.

"I am inspired by the ability of Niagara University to not only prepare students to be educated professionally, but to be good human beings who help others and really understand themselves so they can go out and be who they are with the people they are going to serve. They are really well prepared for what's out there. I hope to see more of that someday."