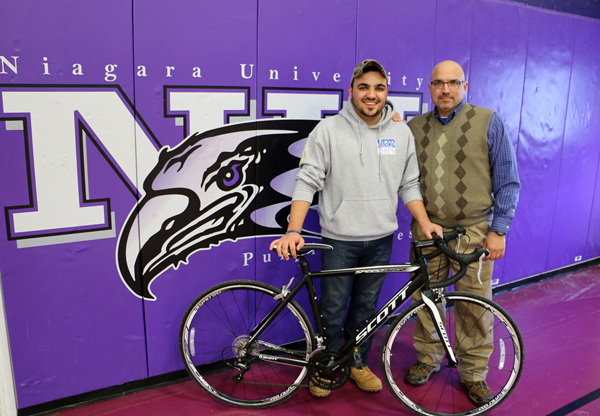 Pictured, from left, are Jake and Mike Pandolfi.

Jake Pandolfi is rehabbing a torn anterior cruciate ligament by riding a bicycle 4,000 miles across the U.S.

Truthfully, overcoming the shredded ACL suffered while skiing last winter isn't the Niagara University junior's primary motivation for pedaling from Baltimore to Seattle this summer. Raising as much money as possible for cancer patients is his real goal.

Starting May 31, Pandolfi will become the latest NU representative to participate in the 4K for Cancer, an Ulman Cancer Fund for Young Adults program that raises financial support and awareness for young adults suffering from cancer.

Since 2001, groups of college students have undertaken journeys across America with the goal of offering hope, inspiration and support to cancer communities along the way.

In 2014, 139 4K for Cancer participants traveled across the U.S. and were able to raise more than $1 million to support individuals affected by cancer. Taylor Plewinski (Class of 2017) and Leanne Stuck ('14) were part of that team, collecting $15,100 in donations to the cause.

Like those who pedaled before him, Pandolfi has personal reasons for spending the majority of his summer - the trip lasts 70 days - on a Trek CrossRip bicycle.

"When I was 13, my father suffered from cancer," Pandolfi said. "I witnessed the horrors of chemo treatment and how it affects not only the patient, but their family and friends. Fortunately, he won his battle and is my inspiration for this trip.

"Since then, several of my friends' parents have passed away from cancer along with a few of my family members. At 13, I couldn't do anything about it, but now that I am older, I have the motivation and the means to support the cancer community that gave my family so much. I want to inspire hope in everyone: family, friends and strangers alike."

Pandolfi actually signed up for the program last year. He and Stuck have been friends since elementary school and she was by his side throughout his father's fight with the disease. Pandolfi was forced to defer after injuring his knee, but said he's healed up and ready to go.

Since the Western New York winter hasn't exactly been conducive to training outdoors, Pandolfi has been clocking as much time as possible on spin bikes when he finishes working shifts at NU's Kiernan Recreation Center and at L.A. Fitness. The Amherst native has tried to recruit others to join him on the ride - to no avail.

"Most of my friends that I tried to get involved just called me crazy," he admitted.

The Ulman Cancer Fund for Young Adults is a nonprofit organization dedicated to enhancing lives by supporting, educating and connecting young adults, and their loved ones, affected by cancer.

"By raising money for the Ulman Fund, I can support families across America," said Pandolfi, an effervescent liberal arts major considering careers in English, communications and/or politics. "I believe, however, that love, encouragement and a smile can also go a long way. If I can change one person's day by smiling, they might pass on the smile. My team and I will have the chance to meet families affected by cancer, and I believe that my smile and personality can touch the hearts of those families."

For more information on the 4K for Cancer, visit http://4kforcancer.org.