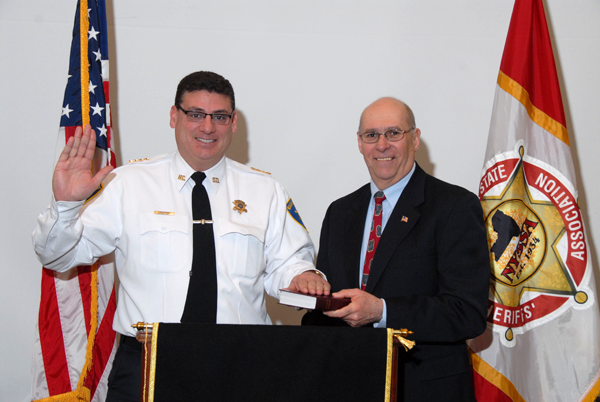 Niagara County Sheriff Voutour (left) is sworn in as a president of the state Sheriffs Association by Thomas Beilein (right), chairman of the state Commission of Correction, at the installation of officers during the Association's 81st annual Winter Training Conference at the Desmond in Albany.

The New York State Sheriffs' Association held elections of its board of directors at the 81st annual Winter Training Conference Tuesday at the Desmond Hotel in Albany. Members elected Niagara County Sheriff James Voutour as president. Thomas Beilein, chairman of the state Commission of Correction and former Niagara County sheriff, swore him in. Voutour served then Sheriff Beilein as chief deputy in Niagara County.

As president, Voutour will work with New York's sheriffs to further the efforts of the Sheriffs' Association to enhance public safety across the state through professional training and accreditation programs, public safety programs and advocacy.

The New York State Sheriffs' Association Inc. is a not-for-profit corporation formed in 1934 for the purpose of assisting sheriffs in the efficient and effective delivery of services to the public. It comprises all of the elected and appointed sheriffs of New York.