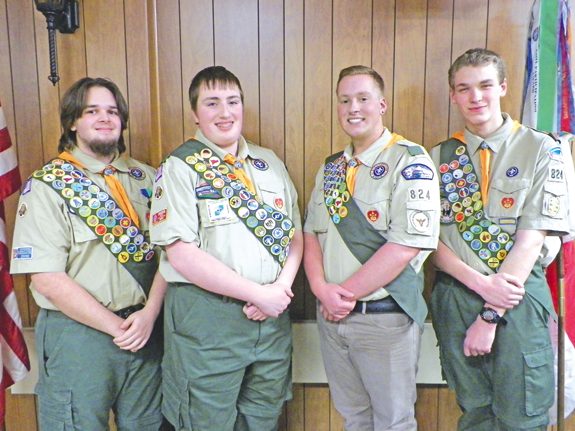 Boy Scout Troop 824 announced that four members of their Troop recently achieved the rank of Eagle Scout. Ryan Gross, Zachary Taylor, Alex Beresheski, and Raymond Delucci all completed their projects between May 2014 and November 2014. These young men join the Eagle Rank along with the Troop's first Eagle Scout, John Kummer.

Ryan M. Gross, son of Michael J. Gross of Wheatfield, completed his Eagle Scout project at Moving Miracles Dance Studio in West Seneca. Ryan is a member of the Order of the Arrow and has achieved numerous merit badges over his journey of Scouting. Gross is a graduate of Niagara-Wheatfield and is currently a detail manager for Delta Sonic Carwash. He plans to attend Niagara County Community College.

Zachary Taylor earned the rank of Eagle Scout on Dec. 15, 2014. His project was the remodeling of two visitation rooms at the Niagara County Department of Social Services in Niagara Falls. Zachary began his Scouting career at the age of 7 as a Tiger Cub Scout with Pack 855 in Lewiston, with the goal of one day becoming an Eagle. Zachary has not only been an active Scout, but he has also been involved with volunteering in his community through various organizations, including Rainbow of Help. He is a student of karate at Yi-Dan Cha Gi Karate in North Tonawanda. Zachary is currently a senior at Lewiston-Porter High School, maintaining his academics at honor roll levels. Zachary served as an ambassador with People to People International, traveling to Australia in 2009.

Alex Beresheski is the third Eagle Scout recipient. Alex is 16 years old and a junior at Lewiston-Porter High School. He is currently studying two Advanced Placement subjects and is on the academic merit roll. Alex started in Cub Scouts in 2006 and has been with Boy Scout Troop 824 since 2012. He has held various leadership positions, including troop librarian, troop scribe, assistant senior patrol leader and senior patrol leader, and has attained 36 merit badges. He is a member of the Order of the Arrow, a trainer for the Leave No Trace Boy Scout Outdoor Ethics program, and a graduate of the White Buffalo National Youth Leadership program. Alex's Eagle Scout service project was to build three benches for the Kimberly Woodruff Memorial Trail, adjacent to the Opportunities Unlimited of Niagara Training Center in Wheatfield.

Raymond is a senior at Niagara-Wheatfield High School. For his Eagle project, Raymond set up trail markers, noting various flora and fauna, for the Town of Niagara. He enjoys hunting, fishing, cooking, and playing video games. Raymond has been involved in Scouting since he was 5 years old. Raymond is a state officer for SkillsUSA. He attends BOCES for culinary arts and is on the Pro-Start culinary team. He has been accepted to the Culinary Institute of America, the best culinary school in the nation. Raymond plans on owning his own restaurant and becoming a master chef. He would also like to become a philanthropist and give back to society when he is older.

A ceremony, honoring the accomplishments of these outstanding young men, will be held from 2 to 5 p.m. March 1, at the Sanborn Volunteer Fire Company firehall, 5811 Buffalo St., Sanborn.