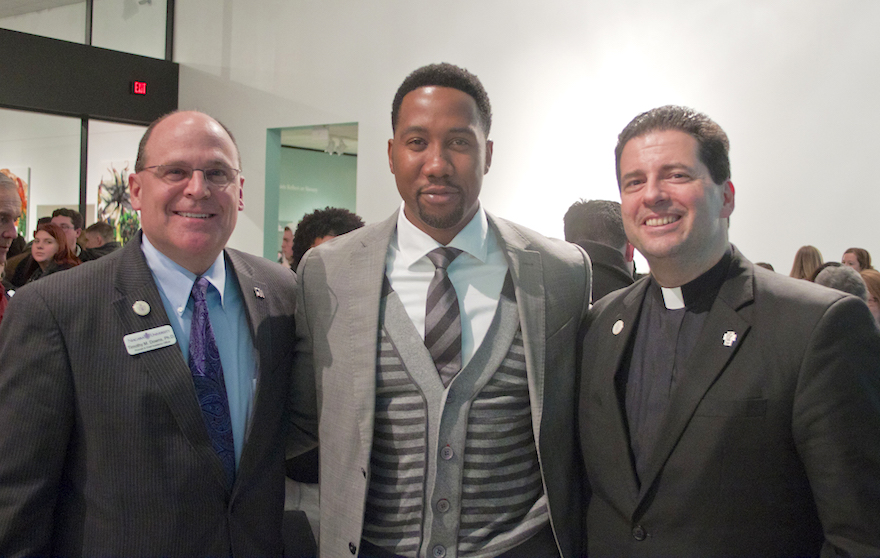 Ndaba Mandela, in an hour-long keynote address, spoke of the laughs, laments and lessons learned from living with an iconic grandfather who went from prisoner to president, and built a nation.

The event highlighted a week's worth of activities coordinated by NU in observance of the federal holiday that celebrates the birthday of Dr. Martin Luther King Jr. Accordingly, after acknowledging 2015 marked the 30th year of commemorating the iconic American civil rights leader, Mandela commenced his address by reciting an excerpt from King's "I Have a Dream" speech.

Mandela, 32, then turned his attention to sharing his story of how he became a man under the warm embrace and expert tutelage of one of history's greatest teachers.

Like many of Nelson Mandela's 17 grandchildren, Ndaba grew up in the family's ancestral home outside of Johannesburg, South Africa. It wasn't until 1990, when he was 8 years old, that he met his grandfather for the first time in a South African jail where Nelson Mandela was nearing completion of a 27-year prison sentence. Ndaba moved in with his grandfather when he was 11 years old.

Mandela said his relationship with his grandfather, especially early on, was predicated on education. "It was always, 'How is school? Are you passing in school? Do you need anything for school?' "

He would come to understand Nelson Mandela's emphasis on academics when he embarked on his own remarkable efforts to advance the Mandela family's trailblazing legacy.

Mandela recalled that, when he began traveling, the only questions he would receive about his home nation were tied to animals and crime. It took him aback when people would ask him if they needed a bodyguard should they ever dare to visit South Africa.

It was evident to Mandela the perception of South Africa had to change.

"Africa is consistently being portrayed in the media as a place of poverty, disease, dictatorship, war - and we're not trying to deny that these things exist," he explained. "However, there is much more to Africa that people should know about.

In 2009, Mandela and his cousin, Kweku Mandela, established a nonprofit organization called Africa Rising with the vision that it will be a catalyst in empowering a new breed of young Africans to be at the forefront of development. Africa Rising is constructed on three conceptual pillars: the celebration of African culture, entrepreneurship development and, of course, education.

"Our hopes and dreams lie with the youth," Mandela said. "The students - you - are the key to tomorrow."

In recognition of his work with Africa Rising, Mandela was named by BET and ICON MANN as one of "28 Men of Change" (a Black History Month platform) last January.

In many ways, Mandela is becoming an icon in his own right while adding fuel to his grandfather's fiery message that one person can make a difference. He is advancing the movement to call all world citizens to devote 67 minutes - one minute for every year of Nelson Mandela's public service - to community service. He participated in the United Nations' "Protect the Goal" campaign against AIDS, the disease that claimed the lives of his parents, and he is very active in the Global Poverty Project, a crusade to eradicate extreme global poverty by 2030.

Throughout Mandela's presentation, he preached the values of unity and sacrifice. He affirmed sacrifice is what made history's most influential leaders what they were, citing Dr. Martin Luther King Jr., Malcolm X and Nelson Mandela as examples. "They sacrificed everything, including their lives. That is why we have such admiration, such respect for these leaders."

Before concluding with chants of "Viva Nelson Mandela" and "Long live Martin Luther King," Mandela implored the audience to become the change-agents of tomorrow.

"We, as the next generation of leaders, have to find it within ourselves to sacrifice," he said. "I know it's difficult, because we're living in a new world of capitalism and consumerism, where it's all about having the latest iPhone, the nice car, going out to the disco, popping bottles.

"And, yes, we're young people, so we must express ourselves. But who is then going to be going into public positions? Who is going to be the next president of the United States of America? If I sit on the side and complain, who am I expecting to take up the position?

"We have to sacrifice and find a way. That is what Nelson Mandela did."