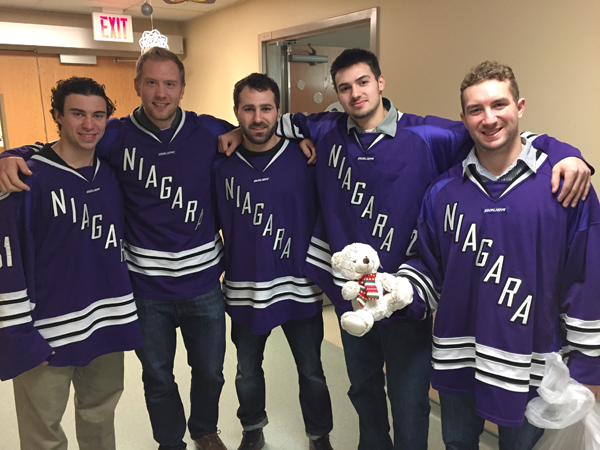 The Niagara men's hockey team spent an afternoon in December handing out teddy bears to the children at Carly's Club at Roswell Park in downtown Buffalo.

Five Purple Eagles made the trek into the city on the day before Christmas Eve to pass out the teddy bears collected during the team's Teddy Bear Toss during the game against the RIT Tigers on Dec. 13.

"It was a great experience to come to Roswell Park and visit the kids around Christmastime," said senior forward Sam Alfieri. "You can see how much it brightens up their day, just by talking to them. It's not so much the gift of the bear, but when you have four or five teammates walk into the room and everyone is just chatting about what is going on, you can really see how much it means to the kids."

Alfieri was joined by juniors Dan Kolenda and Chris Paulin, as well as sophomores Patrick Conte and Vincent Muto.

"It's nice to give back with little things like that every once and awhile," Alfieri said. "It makes you feel good. It was a great experience and I'm glad we did it."

This is the second year that the Purple Eagles were able to collect and distribute toys through a Teddy Bear toss. The first was back in December 2012.