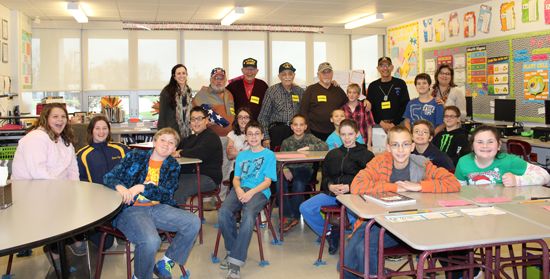 For Veterans Day, students at the Edward Town Middle School in Niagara-Wheatfield decided to give thanks to area veterans for their service in defending our country. Students spent several days writing cards and letters that were delivered to a local VFW. The veterans there were so touched by the gesture that they decided they wanted to meet the students and asked one of their teachers, Janice Farnham, if they could come in and personally thank all the students.

Korean War veteran Peter Fotouros told the students that he read every letter that was sent.

"We really appreciated it and it made us realize that there are many soldiers that will never get to read them because they never came back," he said. "Please make sure to put a flag in your yard to remember all of us."

Each of the veterans told the students about their time in the military and what America means to them. World War II veteran Cosmo Fratello said he remembered Dec. 8, 1941, and hearing that the Japanese had bombed Pearl Harbor.

"I was so outraged," he said. "I decided I wanted to be a pilot, so I volunteered for the Army to serve my country. I didn't pass the exam, so I was trained as a mechanic and repaired B-29s and P-51s."

Vincent Canosa, who served in Vietnam, said he will never forget returning home.

"In Vietnam, we endured a lot of rocket attacks, and I was so grateful I survived," he said. "I was returning to the U.S. on a 15-hour plane trip, and I remember the pilot saying, 'if you look out the right side of your window you will see lights. Those lights are America.'

"We all ran over to that side of the plane. It was a beautiful sight. I thanked God I made it back."

Dale DeBacco came in holding an American flag. "I want you to remember that our flag means freedom, and there are so many countries in the world that are not free," he said. "Just remember, our military keeps us safe on a daily basis. There are a lot of good men and women who died to give you that freedom, and freedom is not free."