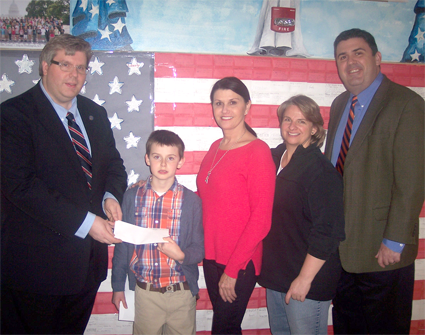 Charles Dieteman, Charlie to his teachers and classmates, honored World Cerebral Palsy Day Oct. 1 by collecting, and then donating, more than $600 to Niagara Cerebral Palsy.

Dieteman, a sixth grade student at Lewiston-Porter Middle School, was born with cerebral palsy (CP), a chronic condition affecting the areas of the brain that control movement and muscle coordination.

According to Tara McLellan, Dieteman's mother, his CP is mild, but he still has his struggles. Less than 7 percent of individuals with CP have more than one type. He has more than three.

"It isn't CP that defines Charlie," said Joy Khatib, a teacher at the multi-age Intermediate Education Center (IEC). "He is widely known throughout both schools for his contagious smile, kind personality and compassion towards others. Charlie possesses a relentless spirit that never gives up and always sees the positive side to any situation."

Khatib said that to help raise awareness and educate students about CP, Dieteman's former IEC Multi-Age class and the Builders Club joined forces, and Oddy, Khatib and IEC teacher Katie Danahy's class organized a fundraiser in the elementary and middle schools. Green CP awareness ribbon stickers were sold for 50 cents each. McLellan made green ribbons for the staff to wear. Students and teachers alike sported the bright green ribbons to show support and love to their friend and fellow classmate.

The middle school raised $435 in one day, and the elementary school raised more than $170 in three days. Together the two schools raised $605 for NCP. The money will go to NCP's educational division, to help purchase new playground equipment for the pre-school's playground renovation project.

Dean Ramirez, the school's principal, was so impressed with the gesture that he nominated Dieteman for the "Do the Right Thing" award through the Police Athletic League. Dieteman was presented with the award in October.

"It took a lot of courage to do what Charlie did," Ramirez said. "He got on the television announcements, talked about himself, and about Cerebral Palsy, and made it clear that he is a normal kid with a great family and a lot of support.

"Coming into a new school environment, he had the will to make sure that the other kids understood his condition. We teach our kids to be proactive rather than reactive. Charlie did the right thing by proactively introducing his condition to the school."

On Dieteman's fundraiser, Ramirez said, "He encouraged kids to participate in World Cerebral Palsy day by wearing green and donating 50 cents to the cause. The next morning, a sea of green was evident in the hallways by both the students and the staff, and at the end of the day, Charlie raised more than $400. It was evident that his message was heard by the school community. We are very proud of Charlie and the courage that he displayed. He is a role model to us all."