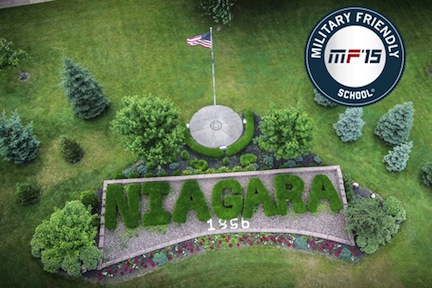 Niagara University has been designated a 2015 Military Friendly School by Victory Media, the leader in successfully connecting the military and civilian worlds.

NU has become a fixture in the Victory Media rankings, as well as other lists that recognize institutions that are doing the most to embrace America's military service members, veterans and spouses as students.

Now in its sixth year, the Military Friendly Schools designation is awarded to the top 15 percent of colleges dedicating resources to ensure the success of veterans and their families in the classroom and after graduation.

The methodology used for making the Military Friendly Schools list has changed the student veteran landscape to one much more transparent, and has played a significant role over the past six years in capturing and advancing best practices to support military students across the country.

"Our entire campus community is adamant about welcoming military veterans with open arms, and providing them with the necessary resources to transition back into a traditional education setting," said Robert Healy, Niagara University's veterans services coordinator, and a retired Air Force veteran. "I'm quite proud to be involved with an organization that does so much to make sure that these service men and women succeed."

Victory Media is a service-disabled, veteran-owned business serving the military community since 2001.

The Military Friendly survey captures more than 50 leading practices in supporting military students and is available free of charge to the more than 8,000 schools approved for Post-9/11 GI Bill funding. As in past years, the 2015 Military Friendly Schools results were independently tested by Ernst & Young LLP based upon the weightings and methodology developed by Victory Media with input by its independent academic advisory board.

Niagara University has a long history of honoring and supporting military students, veterans and their families. The Catholic and Vincentian university supports a U.S. Army ROTC program, and participates in the Department of Veterans Affairs GI Bill Yellow Ribbon Program, a provision of the Post-9/11 Veterans Educational Assistance Act of 2008.

Military alumni of Niagara include two Medal of Honor recipients: Gen. William Donovan and Lt. John Bobo, and a humanitarian nominated for sainthood: Father Nelson Baker. Being in close proximity to Niagara Falls Air Reserve Station and the regional Military Entrance Processing Station, Niagara is responsive to the unique needs of military students, veterans and dependents.