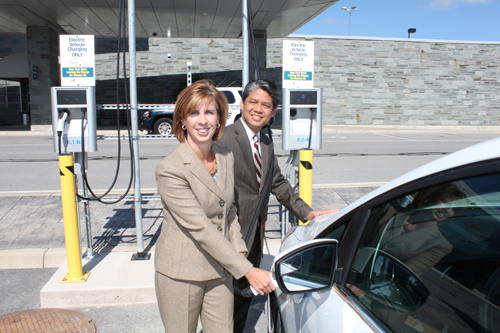 Niagara Falls International Airport has two new charging stations for airport traveler use, as part of a statewide network of up to 3,000 EV charging stations slated for public and workplace locations across New York by 2018. The charging stations are being undertaken through Gov. Andrew Cuomo's "Charge NY" initiative, launched last year.

The announcement of the latest charging stations coincides with National Drive Electric Week a nationwide initiative to heighten awareness of the benefits of plug-in vehicles.

The charging stations at Niagara Falls International Airport, highlighted by an event today, are among 100 that the New York Power Authority and New York State Energy Research and Development Authority are installing by the end of the year at 37 public and workplace locations around the state, including three at Buffalo-Niagara International Airport. Learn more about EV charging stations and other NFTA sustainability efforts at http://youtu.be/j4uqOrkdnMA.

Both the Niagara Falls and Buffalo airports are managed by the Niagara Frontier Transportation Authority. Data from the New York State Department of Motor Vehicles stated the Buffalo area is among those regions of the state with the highest concentrations of EV and plug-in hybrid vehicle ownership. Currently, there are approximately 700 such vehicles in the area.

Cuomo launched "Charge NY" to help bring about greater use of plug-in electric vehicles by expanding the state's EV charging infrastructure. The initiative also lays a foundation for additional investments in clean technologies by the private sector and advances efforts to lower climate-changing greenhouse gas emissions. The charging equipment at the Niagara Falls and Buffalo airports was installed by Allegro Power of Buffalo.

"The charging stations located at the Niagara Falls International Airport are another great example of the partnerships taking place in New York under Gov. Cuomo's 'Charge NY' initiative to provide greater access to charging stations in order to encourage the use of electric vehicles in the state," said John B. Rhodes, NYSERDA president and CEO. "The 'Charge NY' initiative is part of a larger effort by the state to decrease the use of fossil fuel while spurring the growth of the clean-energy economy and protecting the environment."

The charging stations at NFTA facilities support the transportation organization's sustainability practices, which are geared toward protecting and enhancing the environment, as well as the health and safety of NFTA employees. NFTA, which benefits from low-cost NYPA hydropower for its light-rail system and other uses, also gives priority to reducing waste, increasing fuel efficiency, promoting recycling, and adapting more energy-efficient lighting and propulsion systems. As part of its sustainability practices, NFTA also is employing community-based strategies to encourage transit-oriented land-use development to increase public transit ridership.

"Transportation is one of our biggest climate challenges and, at the same time, one of our biggest opportunities," said NFTA Chairman Howard A. Zemsky. "Through Gov. Cuomo's 'Charge NY' initiative, customers using both the Niagara Falls and Buffalo Niagara International Airports now will have the opportunity to recharge their electric vehicles and help reduce their personal carbon footprint by eliminating climate changing greenhouse gas emissions."

The charging stations at the two airports are each capable of supplying up to 6 kilowatts of power to an electric vehicle. Charge times will vary depending on the size and type of car, but for mid-sized vehicles (e.g., the Chevrolet Volt, Ford C-MAX Hybrid Energi or Nissan Leaf), charging is expected to take approximately four hours. EV drivers to NFTA's airports will be able to charge their cars without cost for a four-year trial period.

The charging stations are equipped with software that will allow EV users to remotely monitor the charging process and pay for the battery charge, if applicable. The software also will collect and transmit data on frequency of use, length of charges and amount of energy dispensed, to provide NYPA and NYSERDA with input for use in locating future charging stations.

Since "Charge NY" was launched, nearly 500 EV charging stations have been added in New York, bringing the current total number in the state to approximately 1,000. This puts the state well within reach of the "Charge NY" goal of adding up to 3,000 EV charging stations by 2018. Under "Charge NY," the number of electric vehicles in New York has risen from 1,000 in early 2012, to more than 10,000 plug-in vehicles on the road today.

Congressman Brian Higgins said, "Niagara Falls helped to deliver clean hydropower over 100 years ago. Partnerships between the New York Power Authority and Niagara Falls Airport that continue to promote the region's leadership on clean energy are a natural fit."

State Sen. George Maziarz said, "These charging stations offer motorists new ways to power their vehicles, reduce our dependence on foreign oil, and protect the environment. I'm pleased to see this kind of facility come on-line in the Niagara Region so our local residents and the thousands of cars going in and out of the airport can benefit from it."

Assemblyman John Ceretto said, "As we move into the future of transportation, these improvements at the airport become our first steps. As more electric vehicles are purchased, charging stations become a necessity. I am proud to support clean air initiatives."

Niagara Falls Mayor Paul Dyster said, "It was in Niagara Falls that Nikola Tesla, father of the electrical age and early advocate for Niagara hydropower, first demonstrated the superiority of AC power transmission, helping to light the world at the end of the 19th and beginning of the 20th centuries. Now, we're entering the second great age of electricity, as we seek new sources of clean, green electrical power to light our homes, power our factories, and fuel our all-American passion for automobiles with the advent of the electric car. How fitting that we have gathered here in Niagara to celebrate Gov. Andrew Cuomo and NYPA's determination to move our state to the vanguard in providing vital logistic support for the future development of the electric car industry."

William L. Ross, chairman, Niagara County Legislature, said, "Having these electric charging stations throughout New York state is key to helping our state transition to new energy alternatives that are more environmentally friendly and reduce our reliance on foreign oil. Gov. Cuomo's 'Charge NY' initiative is surely helping to usher in a new era in green energy, and we're pleased that the Niagara Falls International Airport and the NFTA are partnering in this great program along with NYPA and NYSERDA. Thanks to all for their leadership in this initiative that will help us move closer to realizing Gov. Cuomo's goals for a sustainable future."