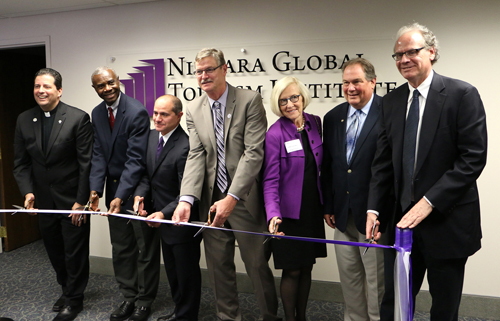 A Niagara University-led initiative to transform the regional tourism industry is officially underway.

A grand opening of the Niagara Global Tourism Institute was held today in the institute's headquarters, which are housed in the historic Power City Building, at the corner of Third and Old Falls streets in the heart of the downtown tourism district in Niagara Falls.

The NGTI seeks to leverage the university's significant history and resources in hospitality and tourism management to enhance Niagara Falls' tourism industry, which has been identified as a key economic driver by the Western New York Regional Economic Development Council.

The program's development also correlates with NU's service-centered mission and the objectives of Gov. Andrew Cuomo, who has made the revitalization of Niagara Falls a top priority.

"The university's mission in this and every effort is dictated by the founder of our Vincentian community, St. Vincent de Paul, and is part of our responsibility as an institution to invest in the community of our 1856 founding," said the Rev. James J. Maher, C.M., president of Niagara University.

"We recognize that poverty is not just economic, but also personal and social, and firmly believe that tourism is the best way to seize the moral imperative to drive the economy of this region. Niagara, first college in the world to offer a bachelor's degree in tourism, is particularly poised to spearhead this action. We will put our prestigious faculty and administration to work side-by-side with students in the area of research. We see the NGTI as way to improve the quality of life for every citizen in this community."

The initial, $50,000 study that resulted in the formation of the NGTI was funded by the support of New York state through the USA Niagara Development Corp.

"It is appropriate a New York Power Authority proceeds funding award is assisting Niagara University, a world-class academic institution and neighbor to the Power Authority's Niagara Power Project, to establish the Niagara Global Tourism Institute," said Gil C. Quiniones, NYPA president and CEO. "The partnership between the Power Authority and Niagara University continues to seek innovative ways to optimize our unique assets to ensure this region remains a national treasure, drawing visitors from around the world for generations to come."

Working with local, state and federal agencies in partnership with the tourism industry, the NGTI will seek to create the conditions that turn around the reputation and economic viability of Western New York.

"Our region employs over 50,000 people in the tourism sector, with well over $2 billion in economic impact. Technology is changing the face of tourism and tourism marketing, and the Global Tourism Institute at NU will establish Western New York as a world leader in developing and leveraging these emerging technologies in order to grow our tourism economy, and to attract talent to our tourism industry and to our region," said Howard A. Zemsky, Western New York Regional Economic Development Council co-chair and managing partner of Larkin Development Group.

"The Niagara Global Tourism Institute in downtown Niagara Falls is, I believe, a critical component in taking us to the next stage of regional economic development," said Niagara Falls Mayor Paul Dyster. "It provides an ideal collaborative framework to address the fundamental issues of destination competitiveness. I look forward to working with Niagara University and its partners in seeing the Global Tourism Institute become part of the 'new' Niagara Falls."

"It's gratifying to see the Niagara Global Tourism Institute move from concept to fruition," said Christopher Schoepflin, president of USA Niagara Development Corp. "A major part of Gov. Cuomo's vision for the region involves spearheading creativity and innovation in the tourism industry, one of the state's largest economic drivers. With Niagara University as an integral partner, I have great hope that the institute will yield new ideas, strategic relationships, and even future prototypes ready to try out in what is likely one the world's best market test beds: Niagara Falls."

"The Rust Belt is fighting back, and the cities of Buffalo and Niagara Falls are challenging outmoded perceptions with a clearly focused economic development strategy, where the tourism industry has been identified as a major driver of regeneration," said Dr. Edward Friel, director of the NGTI. "We are in the early stages of reclaiming our cities and returning them to our communities as places we can be proud of again. This project is focused on winning for our communities by building on the enormous foundation we have already inherited. Rich in assets, unique in its history, heritage and culture, and blessed with the magnificent Niagara Falls, the days when we apologized for Western New York will soon be consigned to the dust bin of history."

The establishment of the institute comes alongside Cuomo's focus on revitalizing Niagara Falls as a critical pillar in tourism development in Western New York.

The NGTI will have four core components:

•Technology - To utilize new and emerging technologies in support of destination development, marketing and visitor servicing.

•Tourism business incubation to encourage entrepreneurial creativity and the development of new businesses in the tourism sector.

Along with being the first institution to offer a bachelor's degree in tourism, Niagara University's College of Hospitality and Tourism Management is consistently ranked among the best in the world. It is a founding member of Hotel Schools of Distinction (formerly Leading Hotel Schools of the World), a global network of premier higher-education institutions.

NU's student chapter of the Club Managers Association of America has been ranked No. 1 in the country for five consecutive years. Hospitality and tourism management majors serve on consulting teams at the world-famous Waldorf-Astoria hotel in New York City, participate in courses aboard a Norwegian Cruise Line ship, and help organize events at the Super Bowl and other major sports and tourism venues.

For more information on the Niagara Global Tourism Institute, contact Friel at 716-524-2575 or [email protected].