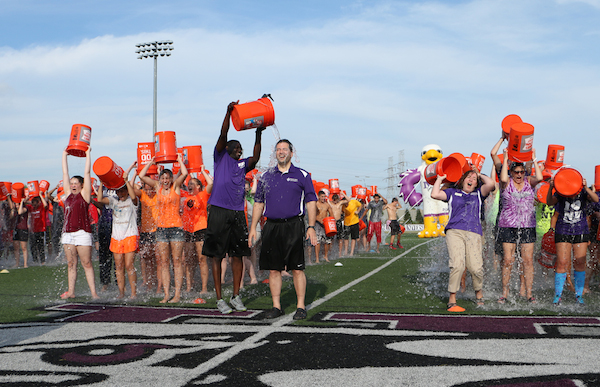 The video is available online at www.niagara.edu/icebucket.

Maher was challenged by the Rev. Dennis H. Holtschneider, C.M., president of DePaul University. DePaul, like Niagara, is a Vincentian institution. Holtschneider graduated from Niagara in 1985, and later served as executive vice president of his alma mater from 2000-04.

Maher accepted the challenge in memory of late Niagara University athletic trainer Ray Kist, who died in 1995 after a long battle with ALS, also known as "Lou Gehrig's disease."

The event was included as part of NU's new student orientation, which continued through Labor Day. Today is the first day of classes at NU.

Home Depot donated the buckets for the challenge, while ice was contributed from Sodexo.

The "Ice Bucket Challenge" has become a fundraising phenomenon, especially on social media. Donations to the ALS Association have topped more than $100 million to help fight ALS since July 29, which is quadruple the amount raised by the association during the same period last year.