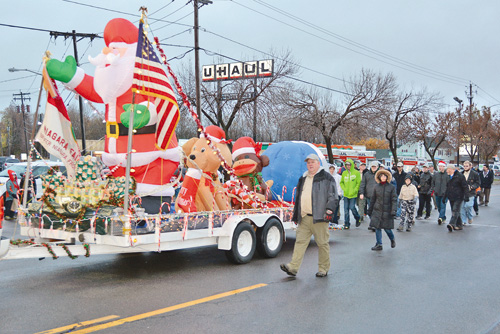 Pictured is a colorful entry in the 2013 Niagara Electric Lights Parade. (photo by Marc Carpenter)

Applications are available at www.tnbpa.com as well as at the Town of Niagara Town Hall Clerk's Office, 7105 Lockport Road.

As always, a major highlight of the Electric Lights Parade is the appearance of Santa Claus, who will greet the crowd and be on hand for photos.

A food drive again will be part of this year's parade. Volunteers will gather nonperishable food donations from parade spectators on behalf of Community Missions. If participants wish, parade organizers encourage donations to their church food pantries; just let them know it is on behalf of the Niagara Electric Lights Parade. In 2013, the Community Missions food pantry served more than 30,000 meals to individuals.

Last year's parade drew several thousand spectators, along with the hundreds who were part of the bands, floats and community groups which took part.