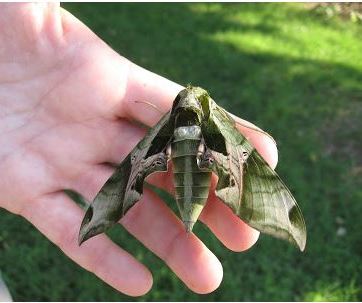 Last week, I received an email from Mary Rochon Dorszynski who lives in the Village of Youngstown telling me she saw and photographed what she thought was an oleander hawk moth. It was perched on her U.S. flag in her backyard. She was so excited she called her husband, Steve, at the golf course to tell him about it and told him to "come home and see this thing."

Now, she figured, "Steve can vouch for its unique appearance." In the meantime, she took a couple of close-up pictures of it.

The oleander moth is not native to the U.S. According to the prominent Wildescreen Archive website, this moth "is mainly found in the southern Mediterranean region, North Africa and the Middle East. However, it is also a rare migrant to the far north, such as to Finland, Sweden, Britain and the Shetland Islands, and has occasionally been found as far east as the Philippines. This species is one of the rarest migrant moths to reach Northern Ireland and has only been recorded there on three occasions."

In the 1970s, it was introduced to Hawaii and has been established there since then.

Upon further research by Steve, it was determined to be a pandorus sphinx moth, shown in the above photo, and is common in the United States. It's reported range is from Nova Scotia and Maine west through southern Wisconsin to central Kansas, and down to South Florida and South Texas. I would guess this was a very rare sighting for around here in Western New York and Niagara County.

Its scientific name is "Eumorphus Pandorus." But we don't have to remember that.

The pictures Mary sent me of what she thought was a "camouflaged oleander hawk moth" were too blurry to print for this story, but the picture you see here is not an oleander hawk moth, but rather a pandorus sphinx moth, and they can be easily mistaken for one another. The picture is from the Chesapeake Audubon Society.

Both Mary and Steve had a feeling this moth might have been a stowaway on an overseas ship that comes into the Welland Canal at St. Catharines. A pretty exciting thought.

I found out a pandorus sphinx moth was sighted, photographed, and verified in Niagara County by a resident in July of 2012. I could show you that picture of it, but the picture is copyrighted.

Sightings are few and far between; if you see one, get it photographed. It will be something you may never see again in your life. Of course, you need to be out in the outdoors.

This moth's wingspan measures 31/4 to 41/2 inches and that is wider than a man's hand. The colors are shades of green to olive green. Mary described it as having "camo colors that were green; the markings were like a Picasso."

If the Sentinel gets this story up on its website, the picture will be in color. Go there if you want to see what Mary is talking about. They are beautiful.

If anyone else in the area sees a pandorus sphinx moth, let me know or let the state Department of Environmental Conservation know with a few details and a photo. You can see in the photo just how big they are.

•In 2012, an oleander had shown up on an oil field ship near Pascagoula, Mississippi, where there is a lot of ship traffic. It has been documented and pictures taken of it. If you look at pictures of both, they resemble the Grumman Stealth Bomber, with the wings swept back, and they are known to fly at speeds up to 12 mph. That's like a human marathon jogging, and pretty darn fast for a bug.

•I got a visit from Tony Mang, a prominent area hunter and avid fisher. He spotted two beavers in the lower Niagara swimming parallel to shore between Stella and the Lewiston Landing while he was fishing. He was baffled at their location, believing beavers liked to build their homes in streams, and thinking the Niagara River current is too unsettling for them. Evidence suggests this is true, but there have been earlier reports in my column of beaver sightings between Youngstown and Fort Niagara as reported by Ed Rogers.

Nobody ever reported seeing a home or a dam of any sort in the river.

•I got an email this week from my star reader and informer, Mike Gillis. Mike's email read: "Hi Mark. They've been seeing a black bear and cubs near Ransomville up near the escarpment. I talked to the DEC and they think it's taken up residence up there somewhere, since two cubs were spotted, too."

If you happen to see one, which would be really rare, don't get scared or anything like that. Move away. Sightings like these are usually from far away, anyway. The only thing that bear would want is safety for her cubs. Whatever you do, don't feed it.

Like Mike said, the DEC is aware of the sighting - as they are of a similar sighting recently in Newfane.

Don't forget, take a kid fishing, and the elderly, too. Pack a lunch, bring a camera. The weather is great for it.