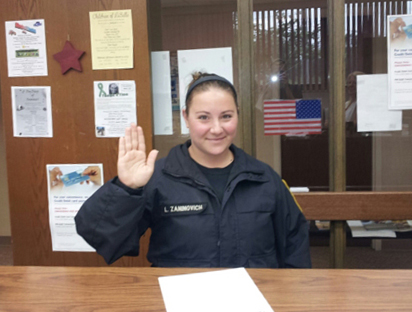 There's a new sheriff in town ... well actually, she's not a sheriff, but she is a peace officer for the Niagara County SPCA.

Newly sworn in Peace Officer Lauren Zaninovich is the Niagara County SPCA's latest agent against animal cruelty. Zaninovich (pictured), originally an employee of the Erie County SPCA, began working at Niagara SPCA as an admissions and adoptions counselor. Shortly after her hire, she took on the position of lobby supervisor. She has also recently worked as dispatcher and shelter manager for the Niagara SPCA.

Zaninovich says of her new position: "It has always been a goal of mine to become an animal investigator. I studied criminal justice at Niagara County Community College, and when an opportunity presented itself for me to attend training to become a peace officer, I knew that I had to take it. I am excited to represent the animals of Niagara County and will work to the best of my ability to see that those who commit cruel acts against them are prosecuted."

The Niagara County SPCA has been without a peace officer for almost two years after budgetary constraints forced the elimination of the position in October 2012.

Executive Director Amy Lewis said, "It was my goal back in February 2012 when I was hired as interim director for the Niagara County SPCA to bring a peace officer to the shelter. I was able to hire an officer later that year, but the position was short lived due to cuts in the budget. This time around, knowing the importance the position brings not only to the credibility of the shelter as a law enforcement agency, but to our ability to follow cases through from beginning to end, I knew I had to find a way to have a peace officer on staff once again."

Lewis made some changes to staffing at the shelter and was able to send Zaninovich to the training to enable her to become a peace officer to protect the animals of Niagara County.

Over the past two years, the Niagara County SPCA has relied on local law enforcement agencies to assist in enforcing the state Agriculture and Markets Animal Cruelty law.

"The local police and sheriffs have been wonderful in assisting us with animal cruelty cases," said Lewis, "but their primary focus is the safety of humans; many are not well versed in Ag and Markets law. This gives us the opportunity to take back the reins on enforcing and prosecuting animal cruelty."

The shelter will continue to work with local police departments and the sheriff's office on future cases if arrests need to be made.