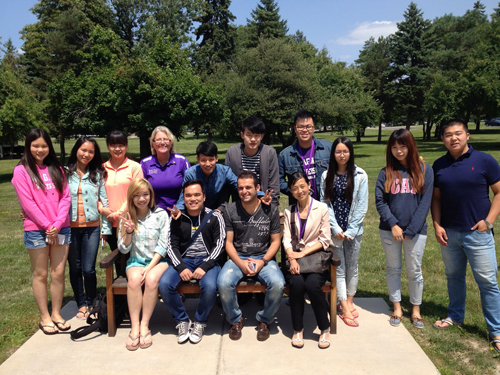 Twelve students and two chaperones from eastern Asia are taking part in a new summer camp at Niagara University intended to offer English language instruction along with immersion into American culture.

Designed for nonnative learners of English, the experience provides four hours of language instruction each weekday. The instruction, which varies by student based on an English language proficiency assessment conducted early in camp, includes practice in conversation, reading and writing enrichment, as well as opportunities to work with coaches in the university's language technology lab.

Participants include nine students from China, two from Vietnam and another from Turkey. They range in age from 19 to 21.

At the completion of the English summer camp, students receive a certificate indicating the English language level and hours completed.

"It is increasingly important for institutions of higher education to prepare graduates for a globalized workplace," said the Rev. James J. Maher, NU president. "Today's technology allows us to truly be citizens of the world, but we must do so responsibly and with the proper education that readies students for the interface of cultures.

"At the same time, we are opening to these students the beauty and dynamism of Western New York, and the warmth of the people who live here."

Added Dr. Hung Le, vice president for international relations: "Exposing Niagara University to students across the globe is a critical strategic direction that Father Maher and the board of trustees are committed to pursuing. Camps like this help the university to fulfill its educational mission while looking at ways of potentially increasing enrollment."

Tang "Warwick" Hao admitted the roughly 12-hour time difference between Niagara and his hometown of Shanghai, China, took some getting used to. However, he said his command of the English language has been drastically improved, thanks in part to his work on a "newspaper," a weekly publication meant to complement the in-class learning exercises.

Hao also said he was impressed by NU's "very big library," which is where he goes to lay out the newspaper.

In addition to the academic curriculum, the international students are taking part in numerous cultural, recreational and enriching activities that focus on the sights and sounds of summer in New York. The group has ridden the Maid of the Mist, witnessed fireworks at Niagara Falls State Park, hiked the Niagara River Gorge, attended a concert at Artpark and taken in a Buffalo Bisons baseball game. This week, they'll tour the New York Power Authority's power vista and walk around the Lewiston Art Festival.

Dr. Debra Colley, dean of Niagara's College of Education, agreed. She said the extracurricular activities are central to the camp's goal of providing a rich understanding of the English language that also builds comprehension through planned initiatives and shared experiences. The residential component - the campers live on campus - augments the experience for the international students as well.

Broadly speaking, it didn't take long for the international students to identify noticeable differences in the campus culture - "Sports in America are very, very nice, and American universities have many more activities than our campuses in China," Guoshun said - as well as NU's scenic, natural setting.

"The environment and weather are very nice, better than China," Hao said, after divulging he thoroughly enjoyed ice skating for the first time. "The campus is very nice. There are a lot of trees and animals; I took a video to bring back with me!"

Chris Cornier, Class of 2016, a peer counselor with the Niagara University Opportunity Program, met the international students during a pickup basketball game. He was immediately impressed with the camaraderie amongst the group, as well as their willingness to befriend current NU students. On July 17, the groups convened to enjoy international music and food together, later exchanging dance techniques native to their countries. Not long after, the campers attended NUOP student poster presentations on Hurricane Katrina.

"The international students are very open and a pleasure to be around. They are very interested in our culture and learning more about us," Cornier said. "They were all very receptive to me; they'd often pull me aside just to talk or crack a few jokes. I love working with them and could see more involvement with them in the near future."

The group is now being mentored by faculty members and students in Niagara's College of Education.

"The English summer camp also provides an important opportunity for students in our TESOL program to gain experience with international students," Colley said. "This extends and enriches the career opportunities for our graduates while providing a high-quality language program for English language learners who have relocated into our region, or who are here for the summer months from across the globe."

One of those students, Erdal Ozturk, had long planned to make the trip from Turkey to the U.S. to visit his uncle and aunt, Niagara University professor Amelia Gallagher, Ph.D. The summer camp gave him that opportunity.

Ozturk, like the others, has relished the serenity of Monteagle Ridge, calling it "fantastic." Also appealing to him are the comparative low prices on consumer goods in America, especially electronics and clothes.

That being said, he still prefers the cuisine of his homeland.

Dr. Deborah T. Curtis, director of NU's Center for Events and Management Development, is overseeing the program. NU hospitality majors are organizing the group's daily afternoon and evening activities throughout their stay on campus, which concludes Aug. 16.

"The summer camp is amazing!" exclaimed Vu Xuan Thai, who is attending Foreign Trade University in Hanoi, Vietnam. "It is the first time I've gone abroad to the United States. To see everything is wonderful for me. Niagara University is very beautiful."

Thai will soon graduate with a degree in finance from a college in Vietnam. He said his experience during the English summer camp at NU has persuaded him to return to the U.S. to obtain a master's degree.

When asked if he'll consider Niagara University when that time comes, he simply smiled and said, "I love this school!"