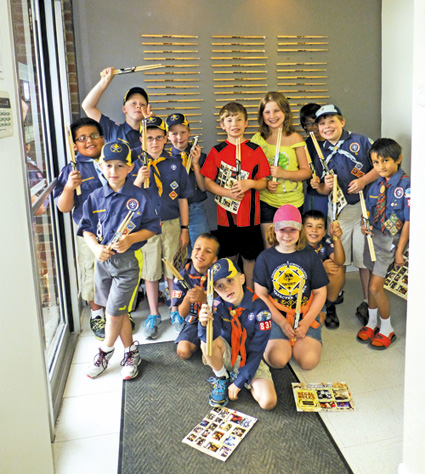 by David Cirrino and Sheila Sorge

On July 16, Cub Scouts from Pack 833 out of Adams Firehall and their families took a trip to Regal Tips in Niagara Falls to see how and where drumsticks, drum brushes and many other cool items are actually made.

Joe Calato, founder and creator of Regal Tips, opened up his doors to give Pack 833 a tour of the company. It is a family-owned and run business since 1958 and owners take pride in the fact the material used to make their nylon-tipped drumsticks are made in the U.S.A.

Calato is actually credited for revolutionizing the music industry with his drumsticks and was inducted to the Hall of Fame for the Percussion Arts Society.

Scouts actually given a tour from Mr. Calato's daughter and the kids were in awe. Not only do they make drumsticks, but also drum brushes, mallets and other accessories. They make more than 2 billion drumsticks a year and ship them worldwide. The business continues to be run by several generations of the Calato family.

Several famous musicians have stepped through the doors of Regal Tips, and Scouts were able to enjoy the sounds provided by these drumsticks.

The tour included a great history lesson as well as actually seeing how the drumsticks are cut from large pieces of wood, shaped, sized, weighed and even where they are being shipped to.

The last part of the tour was the most favorite of the pack when all the kids were given their very own set of "Regal Tips" as long as they followed the rules of not using the sticks on the furniture, their parents' cars or their siblings! A fun, interesting and very enjoyable Pack field trip.