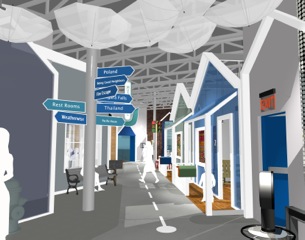 Pictured is a sketch of the "Being Good Neighbors" Educational Play Zone.

Explore & More Children's Museum has received a large anonymous donation through the Community Foundation for Greater Buffalo, another gift from The John R. Oishei Foundation, and a grant from the Peter C. Cornell Trust, all toward the growth and planning of the new museum set to open at Canalside on the Buffalo waterfront in 2016.

Explore & More recently received an anonymous donation of more than $370,000 from the Community Foundation for Greater Buffalo. These funds will be used to support two exhibits in the new museum: "Canal Works," within the Moving Water Education Play Zone, which will focus on the importance of water to Buffalo; and a house representing a culture of a growing Buffalo immigrant population in the "Being Good Neighbors" Educational Play Zone.

"This generous family asked the Community Foundation to explore funding opportunities that align with their charitable goals, and the Explore & More Children's Museum rose to the top," said Clotilde Perez-Bode Dedecker, president/CEO of The Community Foundation for Greater Buffalo. "Since this family wishes to remain anonymous, I'm delighted to be here representing their contribution and to share in the joy that this significant investment will bring to Western New York families for generations to come."

In addition to this anonymous grant, the Community Foundation also awarded the museum $100,000 through its 21st Century Fund biennial grants process earlier this year. More than 350 21st Century Fund members voted to support Explore & More from a pool of 19 grant applications received.

"We are committed to every phase of this project," explained Robert Gioia, Oishei Foundation president. "The addition of a children's museum to Buffalo's waterfront will be a great benefit to the whole community. We hope the community follows our lead in supporting the museum, not only in the planning phase, but in the building phase of the project and beyond."

The John R. Oishei Foundation strives to be a catalyst for change to enhance economic vitality and quality of life for the Buffalo/Niagara region through grantmaking, leadership and network building. The foundation was established in 1940 by John R. Oishei, founder of Trico Products Corp.

Finally, Explore & More was also awarded $50,000 from the Peter C. Cornell Trust, which is also administered by the Community Foundation. This grant will be used for planning and growth of the new museum, and represents more than twice the amount of the Cornell Trust's typical grants.

"It's not too often a project like this comes along that really benefits the entire community," said Peter C. Cornell trustee Jock Mitchell. "Explore & More at Canalside is a home run. We are happy to be a part of a project that will benefit the local economy and provide critically important informal learning activities for the children of Western New York."

"We are humbled by the early support that we have received from so many local foundations who appreciate what a children's museum will mean for downtown Buffalo and all of Western New York," said Explore & More Executive Director Barbara Leggett.

Explore & More also received grants toward planning the new museum from both the East Hill Foundation and the Wendt Foundation, earlier in the planning process.

Celebrating its 20th year in operation, Explore & More Children's Museum provides an environment for creative play and learning through hands-on exhibits, activities and programs that inspire creativity, curiosity and imagination.

Explore & More Children's Museum is currently located at 300 Gleed Ave., in East Aurora. It will open in the South Aud Block at Canalside on the Buffalo waterfront in 2016. For more information, visit www.exploreandmore.org or call 716-655-5131. 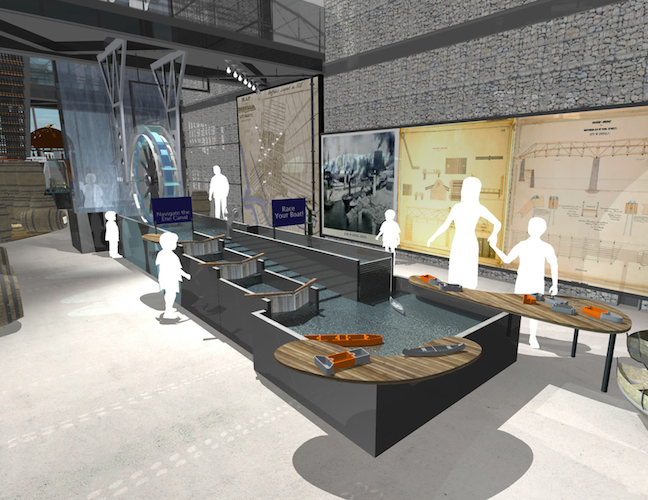 Pictured is a sketch of "Canal Works," within the Moving Water Education Play Zone.