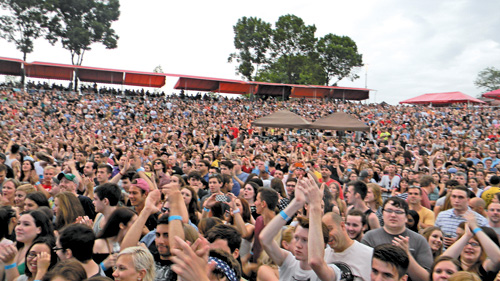 A busy week at Artpark

The past week was a busy one for the Artpark outdoor amphitheater. Events at the concert venue ranged from the all-new Latitude 43 Music Festival to benefit the Variety Club over the weekend, to Tuesday's rain-shortened performance of Widespread Panic, to Wednesday's sold-out Coors Light concert featuring leadoff White Denim followed by the Arctic Monkeys.

The Widespread Panic show saw a crowd in the 6,000 range ultimately fall victim to the wild winds and torrential downpours that hit the area Tuesday evening. Concert organizers first suspended the concert, then hastily relocated concertgoers to the nearby Mainstage Theater. They were forced to ultimately cancel the show after the band's first set. There were no plans announced for a make-up, leading to more than a few thousand unhappy fans.

But that was more than made-up for at Wednesday's Arctic Monkeys concert, a sold-out show that played on for nearly three hours - to the delight of 10,000 excited fans. (picture by Terry Duffy; see more in our photo gallery)