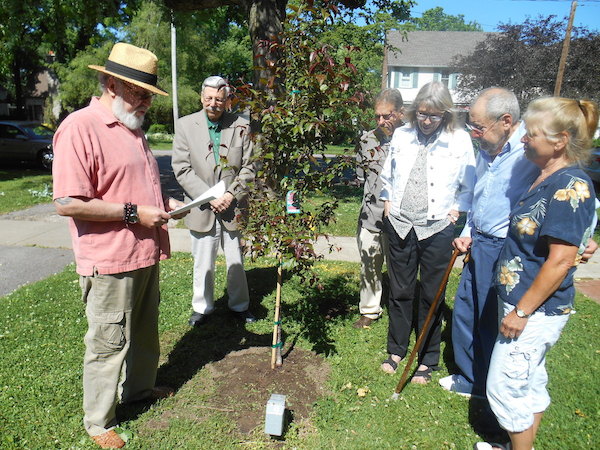 A tree was planted in Hennepin Park this week in memory of longtime bluesman "Harmonica" Dean Germele, who passed away earlier this year.

Longtime friend and fellow musician Timothy "Phil Harmonica" Henderson delivered the following words at the ceremony: "We are planting a tree today in Hennepin Park in Dean's memory. Like this tree, Dean brought so much life to this park in his brief time with us. When 'Harmonica' Dean and the Blue Lights played at the gazebo, there was never a still foot in the park. They cast a magical musical spell over the audience ... and we all knew that we were in the presence of greatness.

"The band's combined years of performing was probably close to 100, with Dean, the youngest member, in front shining the brightest. He played his harp and sang like no other, and won best in WNY and Buffalo contests several years in a row.

"One year, we brought the band fried chicken to have on their break, and Dean took me aside and scolded me because he said that he would never be able to get them back on stage! From his slicked back hair to his jazzy shoes, Dean was always about giving a great show.

"So, like this tree, Dean's memory will live on, illuminated by a single blue light in this park that he brought so much life to."

The tree was planted by Lewiston's A-1 Landscaping services.