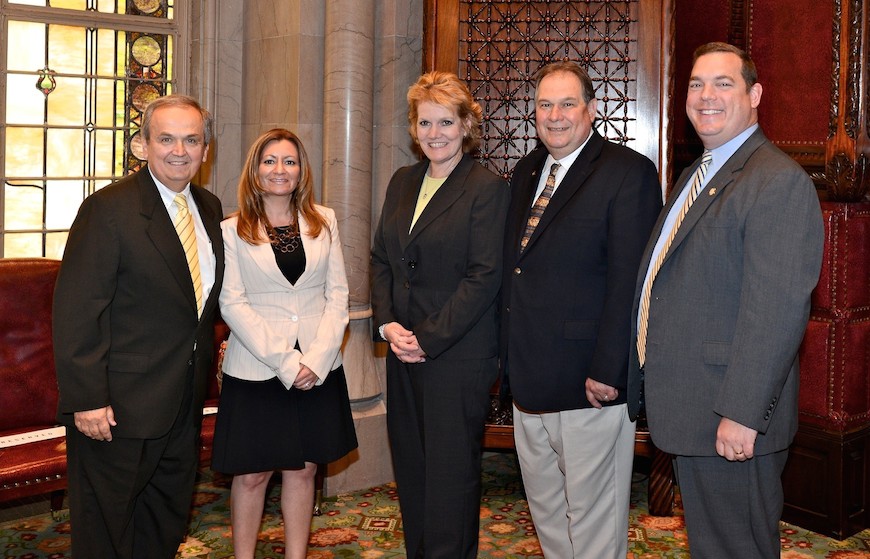 Wheatfield residents Monica Daigler and Julie Otto spent the day in Albany on Tuesday lobbying for legislation to require food produced with fertilizer made from sewage sludge to be labeled. They were hosted by Assemblyman John Ceretto (R-C-I-Lewiston), State Sen. George Maziarz (R-C-I-Newfane) and Assemblyman Ray Walter (R-C-I-Amherst).

Ceretto and Maziarz introduced the legislation, numbered A.9827 in the Assembly and S.7789 in the Senate, after conversations with Daigler, Otto and other members of the Wheatfield community who are deeply concerned about sewage sludge being spread on farmland in their area.

The issue of sewage sludge was brought to Daigler and Otto's attention by the actions of Quasar Energy Group, which planned to spread equate, containing processed sewage sludge, on Wheatfield's farms as fertilizer.

Daigler and Otto contacted Ceretto and Maziarz. They also joined with other public advocates to get the Town of Wheatfield to enact a six-month moratorium on Quasar's equate while experts work on crafting a law banning or limiting its use. Equate is what is left over after anaerobic digestion to create energy at Quasar's Liberty Drive plant in Wheatfield. Biosolids, or treated human waste from wastewater treatment plants, is among the products used in the digestion.

The Ceretto and Maziarz legislation is the next step to make sure that this cannot happen in their community or anywhere else in New York, the lawmakers said.

"Monica and Julie are prime examples of the impact everyday citizens can have on our government. When they learned about the threat to their families posed by sewage sludge, they mobilized and made their voices heard loud and clear," said Ceretto. "They have worked to keep Wheatfield safe and made a positive impact on their community. I thank them for their hard work and stand alongside them as they push for this legislation to be passed."

Maziarz said, "We have worked closely with local advocates and we share their desire to protect the health and public safety of their community. During their visit to Albany, we helped them voice their concerns to the entire Western New York delegation and our partnership will continue until we achieve a positive result."

"I want to thank Julie and Monica for their efforts and advocacy. Protecting our farmland, food, and water supply from the potentially dangerous chemicals contained in this sludge will benefit all New Yorkers," said Walter.

Meanwhile, the latest version of Wheatfield's proposed law banning application of biosolids to town farm fields and preventing construction of equate storage buildings is expected to be brought to the Town Board for review at its June 23 regular meeting.