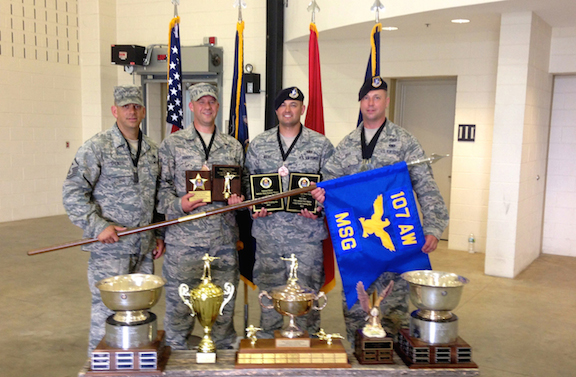 Lewiston's Sr. Master Sgt. Edward Stefik, a member of the 107th Airlift Wing Security Forces, is among about 125 National Guard soldiers and airmen from across New York who have gathered at the Camp Smith training site this weekend to take part in the 35th annual "TAG (The Adjutant General) Match" Combat Rifle and Pistol Championships match shooting competition. The soldiers and airmen will test their marksmanship skills with the M-16 rifle, M-9 pistol and M-249 light machine gun.

Stefik and his fellow airmen from the New York Air National Guard's Niagara Falls-based 107 Airlift Wing have won the match four years in a row. This year marks their fifth year of participation in the match.

Marksmanship training and competition has long been a key component of National Guard training. During the 1800s, annual New York National Guard shooting competitions in New York City and at Camp Smith, then known as Peekskill Camp, were reported by the New York Times and other newspapers.

The state's armories are filled with marksmanship trophies won in local, state and national competitions and proudly displayed.

Today, the tradition continues with a three-day training event that allows units and individual soldiers the opportunity to improve their level of marksmanship training, engage in healthy competition, and pick top contenders to represent the state in national competitions.

The modern Adjutant General's Match requires participants to employ the weapon used on the battlefields. Participants in the match learn to improve their shooting skills and take those lessons back to the other soldiers in their units as trainers.

The match consists of eight timed constraint events that include the use of a pistol, rifle and machine gun - to include close-quarters combat, casualty and nuclear biological chemical drills.