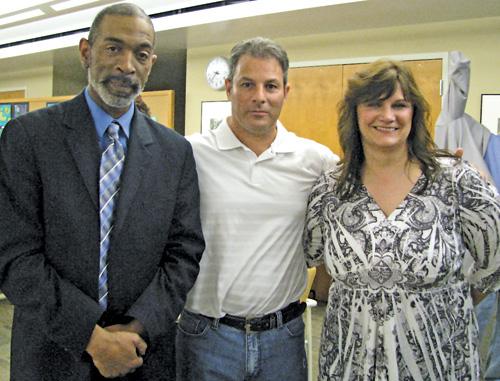 Unofficial results had just been announced that voters approved the $64.6 million N-W budget for 2014-15 by a vote of 2,559 to 1,528, despite an expected 4.78 percent increase in the tax levy (right at the district's tax cap). The new superintendent's budget passed on her first try, after proposals for the last several years had been turned down.

Voter turnout during the day had been good, with a total of 4,185 votes cast in a school district that has been battling financial problems and cutting programs and teachers.

"All I can say is good things happen when a community comes together," Fusco said, noting that parents, teachers and staff members had turned out in force to vote.

Ahead is the difficult part, she said: Continuing to plan for the future and working for change on educational funding and mandates on the state level.

Despite the tax levy increase, the budget included about $1.4 million in cuts and changes, among them the loss of some elementary teachers, which will increase class sizes, and changes in the music and interscholastic sports programs.

"There's nothing left to cut," said board member Christopher Peters, adding that this budget probably was the hardest of the three he has worked on.

Peters, who is completing his first term on the board, won re-election with a vote of 1,762 for one of the three seats open on the board.

Failing to garner enough votes were incumbent Richard Halleen with 1,515 votes and newcomers Daniel Haick with 1,526 votes and Dana Andrews with 1,299 votes.

"We have the right warriors in place on the board," Terbot said, adding, "Now we work on bringing unity."

Sneed, whose young granddaughter was waiting at home with celebratory Play-Doh cookies, also said his first duty will be to understand both the board's vision and the community's vision for the future "so we can all work in the same direction."

"We've got to get to work advocating for more educational funding," he said.

N-W voters also passed 2,353 to 1,433 the Proposition 2 referendum on the ballot, which establishes a reserve fund for financing acquisition of school buses and transportation vehicles plus improvements at transportation-related buildings.

In the third year of the state's property tax cap, 645 districts (97 percent) proposed budgets with tax levies that were within their caps and required only a simple majority to pass. Of those districts, 99.5 percent saw their budgets pass.

Twenty-four districts (3 percent) had budgets with tax levies that exceeded the cap and required a 60 percent "supermajority" to pass. Of those districts, 65 percent saw their budgets pass, with one district too close to call.

The average proposed spending increase for the 2014 school year is 2.6 percent. This year's increase was driven in large part by increases in school district pension and health care costs.