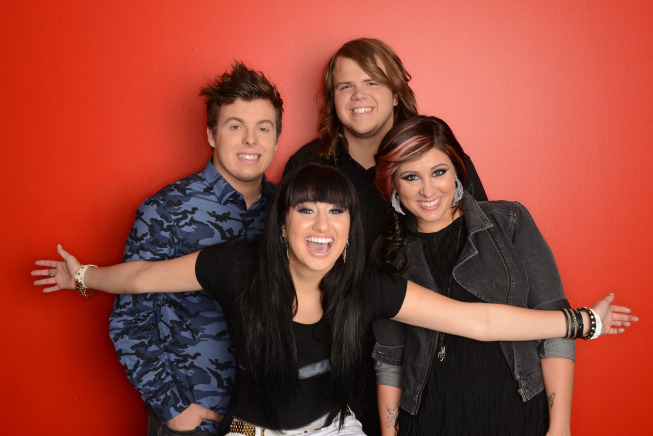 "American Idol" is one of the most tweeted-about shows on television. Pictured, from left, are the final four contestants, who will perform next Wednesday at 8 p.m. on FOX: Alex Preston, Jena Irene, Caleb Johnson and Jessica Meuse. (FOX photo by Michael Becker/copyright 2014 FOX Broadcasting)

#TwitterandTV: A case study on the fascination of live tweeting and TV shows

Warning: Article may be more than 140 characters

We have all watched a TV show in a room surrounded by people. Together you react in fear, shock and excitement. However, have you participated in this same experience virtually?

In today's day and age, people communicate, pay bills and visit family on the Internet. They also watch television shows together while using a fast-paced blog, better known as Twitter. On Twitter, people have the ability to tweet along with the shows live as they are airing. At the same time, they are able to see other fan reactions and opinions on that show.

Two shows that are very commonly tweeted about are "Pretty Little Liars" and "American Idol." One is a popular tween mystery series and the other a singing-based reality show. Both shows bring in high amounts of tweets along with hashtags, videos, pictures and other forms of media right as the episodes are airing.

"Pretty Little Liars" is one of the most tweeted about shows on television. Just during the season finale alone, the show acquired 1.5 million tweets - that is 9,900 tweets per minute. This show is based around Twitter; each episode, hashtags appear on the screen cueing viewers to tweet along as the most suspenseful moments happen. In the season finale, the hashtags #IsEzraAlive and #IsEzraDead averaged 54,000 tweets per minute.

Tweeting live during shows has become so significant because viewers, in many cases, are actually chatting with the stars of the show.

Also during the season finale, @YourFavoriteQueen tweeted, "Ezra, please be alive. We need you. #IsEzraAlive"

"American Idol" does not have Twitter as built into its show as "Pretty Little Liars," but it's still a huge part of the show. During each artist's performance, his or her Twitter user name is displayed on the screen. This allows fans to interact with the singers and provide feedback. On a recent episode of "American Idol," the hashtag #IdolLive was trending throughout the whole episode. Fans would tweet their reaction to the performances, then end their tweet with the hashtag so it could be recognized on the show and for others who were tuned in.

"American Idol" viewer @rhymedr tweeted, "Wow, this show has the whole package deal. Jessica Meuse has power and rhythm, and is ready to tour with Christina Aguilera. ‪#IdolLive"

"Idol" fan @elizabethtrub tweeted, "Oh my goodness ‪@JenaAsciutto1 you are lighting up that stage. Way to start the ‪@AmericanIdol energy. ‪#IdolLive"

Even after the overwhelming positive response in the Twitter world, this question still remains, what makes it so enjoyable to tweet while watching your favorite shows? To answer this question, we must turn to the tweeters themselves.

Jesscia Rueda (@JessieRueda) explained, "Part of the excitement of watching my favorite shows is being able to tweet with my followers and the cast members themselves. For instance, during 'Pretty Little Liars,' I tweet every shocking event as it is happening. It is the most fun to see the cast members reaction over Twitter as they are also watching."

Rueda said there is one drawback to live tweeting during television shows. "It is the worst when you have not watched the show and all of your Twitter friends are giving away the surprising parts," she said.

"American Idol" evokes a different type of Twitter reaction. Each fan gets to become a judge and give an opinion, in 140 characters or less.

"After each performance, I send a tweet directly to the singer and also use the #IdolLive hashtag in hopes to receive a response," Matt Bolea said. "Tweeting while watching TV shows adds a whole different dimension to the experience. This is a direct way to become directly involved with what's happening as it's happening."

Twitter and television are now strongly related with one another. It is as difficult to watch a TV show without tweeting about it as it is not to go on Twitter and see tweets from a show your Twitter friends are watching.

Television will never be the same since Twitter has emerged. Shows with small followings have the ability to reach a huge fan base through the social networking site. Whether you are tweeting along with your favorite contestant on "American Idol," or recovering from a main character possibly being killed off, Twitter is the best way to interact with fans while doing so.