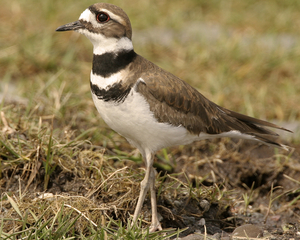 My first introduction to "Mrs. Killdeer" was along a bumpy gravelly road, about 50 feet from a pond. As I approached it in my car I saw this bird skitter out right in front of me pretending to be hurt, like it had a broken wing or a crippled leg or something. It didn't just fly away.

A killdeer is about the size of a robin, but with longer legs. I stopped and watched it until I thought, "Gee, there is nothing I can do for it," and went on my way.

About four or five days later I came down the same road and in the same place, one skittered out again. I thought, "Gee, that's funny, same spot on the road, same antics." I got out of the car and looked around for signs of what it was running away from. Here was a small, 3-1/2 inch nest in the gravel along the roadside, and then I realized this birdie was distracting me away from its nest that was holding her eggs. The nest was a small depression in the gravel with a tiny bit of grass in it, and four eggs.

These birds nest out in the open on the ground, and a little indentation formed at the bottom. They build their nests on the shoulders of roads, in parking lots, on railroad beds - anywhere there are pebbly stones. Killdeer eggs are usually four to a nest.

Around these parts you don't get a chance to see killdeer too often. If you do, pay attention to the killdeer cry heard usually in the spring. It sounds like they are calling out their name when in flight - "keel-deeer, keel-deeer," they repeat. Maybe some of you have heard the killdeer cry or call, not realizing what it was.

After talking with others about this bird I saw and being not sure what it was, I learned it was a killdeer and common. I then did some research on my own to satisfy my curiosity. Seems I must have been sleeping under a rock or something all these years, because even though I have heard of the killdeer I had never laid eyes on one. You won't find them around your feeders; look on golf courses and lawns where they will be looking for creepy crawlers, seeds, insect larvae and things like that.

Killdeer babies hatch with their eyes open, and as soon as their feathers dry out they start following their parents around even though they're a bit wobbly. Killdeer parents don't feed their young like a robin or a lot of other birds, the chicks are born independent. Even though they can't fly yet, they're still under mom's and dad's guidance. They play monkey see, monkey do, copying their parents in searching the ground for something to eat.

A one-day-old killdeer chick is about two weeks older than a one-day-old robin nestling. Killdeer eggs are twice the size of a robin's egg, allowing them to mature a couple of weeks longer in the egg before hatching. Plus there's more nourishment in the killdeer's eggs to sustain the embryo for a longer time in the shell. The birds don't hatch naked like many others; they have fuzzy little feathers already, and are not blind or with naked, wrinkly skin. They have looks only a mother could love.

With the camouflaged coloring of their eggs, you can hardly see them - they look just like the stones they're laying on. Thinking how that was strange - building a nest at the edge of the road where anyone walking or driving by could run over it and not even know it - I thought I had better do something. So I found a fair-sized rock and a piece of tree branch and laid both near the nest so if someone was walking or driving by, they would have to go around it. I suppose the camouflage coloring of the eggs would fool predators too, because the ones I saw blended right in with the surroundings.

It's definitely not good to move the nest to a safer spot, I understand. That mother knows exactly what she is doing and knows where her nest is, so leave it where it is, it will only confuse her.

According to the National Audubon Society, a killdeer is described as "9 to 11 inches, and our largest 'ringed' plover, brown above and white below, with two black bands across the breast, long legs, and relatively long tail. In flight, (it) shows rusty colored upper tail and rump." A plover is described as a wading bird, and killdeer like to be somewhere near water like a pond or a stream of some sort.

In the Audubon Society photo, notice the brown above and white below, with two black bands across breast, long legs, and relatively long tail.

•Lewiston held its annual Smelt Fest Friday, but dipping the lower Niagara for them hasn't happened yet. They may start running this weekend, but that's unlikely. The good run won't start until the water temperature reaches 41-42 degrees. That temp is the gauge of what the old tried and true Niagara River veteran fishermen go by. In 2012, the first real sign of smelt in the river was on April 15 when the temp hit 41 degrees, and in 2013 they didn't show up until April 18. The temp was at 41 degrees, and the best dipping time was between 10 p.m. and 2 a.m. The ice boom should be coming out any day now, and expect ice in the lower Niagara for another 7-10 days after that.

•On Feb. 10, New York State Department of Environmental Conservation officers, accompanied by a special agent from the U.S. Fish and Wildlife Service, executed a search warrant at the residence of John P. Volpe, 62, of the Town of Attica. The warrant was the culmination of an investigation into the illegal possession of protected turtles and birds of prey. Possession of killdeer was one of those species.

The report states: "Mr. Volpe was found to be in possession of more than 100 live native turtles, including one live wood turtle, which is currently listed as a 'species of special concern' in New York state. In addition to the turtles, Mr. Volpe possessed a live screech owl, a live red-tailed hawk, and three live songbirds. He was also found to possess taxidermy mounts of more than a dozen species of protected birds of prey, including: screech owls, great-horned owls, snowy owls, barred owls, saw-whet owls, red-tailed hawks, coopers hawks, sharp-shinned hawks, kestrels and turkey vultures."

"Mr. Volpe knew he needed to have a special permit/license to possess those animals (dead or alive) because back in 2005, Mr. Volpe was found to be in possession of two live birds of prey, a Golden Eagle and American Eagle."

What a dirty bird, eh?

•According to the DEC, Niagara County hunters fared pretty well as did hunters in Erie County. Niagara County numbers showed a total of 1,255 deer taken and Erie County had a total count of 3,107. In breaking down some Niagara County towns, the Town of Royalton had the most count at 699. Lewiston hunters showed up with 69, and Town of Porter, 129. The Town of Wilson, 143 and Wheatfield had a respectable 49.

The Town of Concord with a 647 count led Erie County, and Grand Island, which had the lowest harvest numbers in Erie County, registered 123. Statewide, there were a total of 243,567 adults taken (deer 11/2 years and older).

•The Garlic Mustard Plant Challenge has a goal to remove all garlic mustard plants in an area before they go to seed in late June. A one-day "Super Pull" will take place on May 10 on the Lewiston plateau habitat area at Artpark. Civic groups like boy/girl Scouts, churches, plateau users, etc., interested in participating must register by calling the Reinstein Woods Nature Preserve at 716-683-5959.

For more information on where Super Pulls are going on in other parts of the region, or to register your group, contact Cara Politi at the Reinstein Woods Nature Preserve, or search for "Garlic Mustard Challenge" on Facebook. Garlic mustard is a plant that persists and threatens native plants and other wildflowers. Every garlic mustard plant remaining in June will produce hundreds of seeds. This plant is a native of Europe where it is widespread from Scandinavia to the Mediterranean. It was probably brought to America as a food. The plant challenge is talking place in other areas around our region also.

•So Smart sez, "Men and fish are alike ... they both get into trouble when they open their mouths."