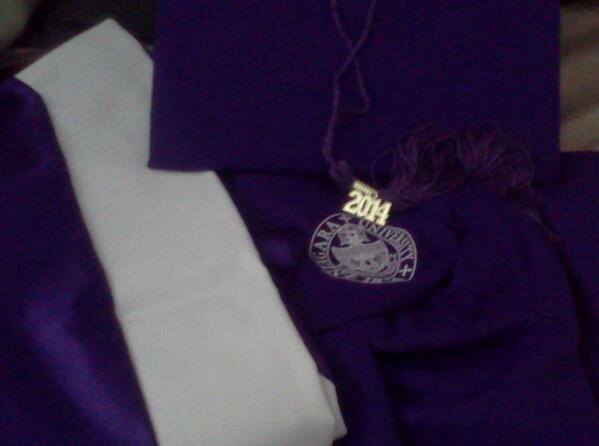 This is it: Time to graduate

It's finally here: The last few days till graduation (18 days to be exact).

During the four years I've spent in college, I am finally down to the last days of it. It's bitter sweet. Everything I've worked for is finally paying off. In 18 short days, I will be a college graduate.

Looking back on these past few years, I've noticed how much I've changed as a person and a student. I started off my college career at community college, because I did not know what I wanted to major in, or where I wanted to go to college. My first year of college was pretty rough, and my grades showed it. After that year, I took college more seriously, and finally figured out what I wanted to major in.

Two years after my first year of college, I finally transferred to Niagara University in Lewiston. In the two short years I've been here, I've made the greatest friends and some of the best memories I will cherish forever.

Out of all the friends I've made in my life, the ones I will never forget are the ones I've made here at Niagara. They are some of the kindest, funniest people I have ever had the pleasure of meeting. I have made so many memories with them that I will remember and look back fondly on the rest of my life. The hockey and basketball games we attended, to the stereotypical college kid's night out, and how we all used each other for support during the toughest parts of the semester. I know I have made friends for life. These are the people who will be in my life for a long time to come.

It's kind of weird to think in a few short days I will be done with school. It's something that I've only dreamed of till now. All the literal and metaphorical blood, sweat and tears have led me here. I've spent 12,816 hours preparing for this moment.

Four years. Four years to finally say, "I am a college graduate." I couldn't be prouder. I can't believe that it went by this fast.

One day 1, I was 18 - a stubborn teenager just entering college, not knowing what I wanted to do with my life. Now I'm a 22-year-old who's preparing for interviews with real marketing and public relation firms. It's weird to look back and see how much I have grown up. I've learned the importance of schoolwork and deadlines. I've also learned the importance of time, and not to waste a second of it.

Everyone is telling me "Don't blink. It'll be over before you know it." They're right. This has been the fastest four years of my life. I still feel like I graduated high school a week ago. It's strange to think that, this coming September, I won't be coming back to Niagara. I won't be moving into a new dorm, or taking classes with someone of my favorite professors. I will be done.

In 18 days, I will be considered an alumna of Niagara University.

It's weird to think I went to school a few miles down the road from one of the seven natural wonders of the world. Even during the dead cold of winter, Niagara University is still one of the most beautiful college campuses I have ever seen.

I will miss my job at the admissions office as a student worker. All those nights spent making phone calls to high school students interested in Niagara University, the open houses I helped set up, and the one awkward tour of campus I gave during a "Discovery Day." I will miss my boss, who is probably the best, most understanding boss I have ever had. This is the first job where I was given real responsibilities and I loved it. I'm going to miss going to the admissions building every Monday-Thursday.

Most importantly, I learned so much during my four years of college. I learned that I actually am a smart girl. I learned to love school during college. I've learned so much about different people. I learned how to share a living space with people who are not my parents and siblings. I learned about the world during these four short years - not only from the people I've met, but through the traveling I had the opportunity to do. I learned that things must be handed in on time if you want a decent grade - something I found difficult in high school and early college.

I learned that I can let my opinion be heard and shouldn't shy away from it. I've learned about different people, cultures and beliefs that are not like my own. I learned that I am lucky enough to even have the chance to go to school, as there are some people in this world who are not so lucky.

I've learned so much, in and out of the classroom. All the skills and knowledge I have learned is something I will keep with me the rest of my life.

In 18 days, I will fulfill my dream of being a college graduate. Everything I have ever worked for since pre-school has come down to this. All the stress and hard work is finally paying off. I will be a college graduate. Something I thought would never happen.

It's finally here, and I can't wait.