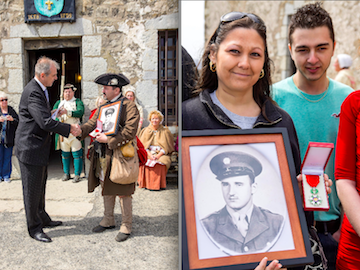 Bright sunshine and relatively warm temperatures greeted folks who came out to Old Fort Niagara for the annual Patriots' Weekend last Saturday and Sunday. Visitors were able to learn about the events leading up to the "shot heard around the world" at Lexington and Concord the morning of April 19, 1775; take part in military drills; watch a skirmish; and learn about a soldier's life in the late 18th century.

On Saturday, Pascal Soares, the French honorary consul for Western New York, posthumously presented Vincent Consiglio with the Legion of Honor for Meritorious Service. Consiglio's family was on hand to accept the award and the Patriot Guard also attended. Three musket volleys were fired after the medal presentation to honor Consiglio, followed by a fourth volley to honor the Patriot Guard. (photos by Wayne Peters)

<<See more photos in our gallery>>