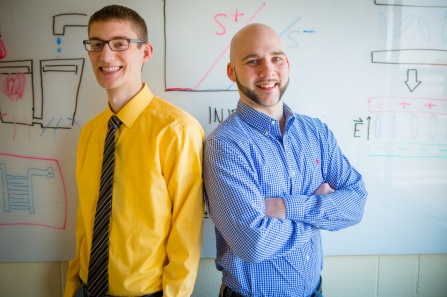 The scholarships are awarded through a program established by the U.S. Congress

Sean Rhett-Burke Bearden, a UB physics and applied mathematics student from the Town of Tonawanda, and Nigel Stephen Michki, a UB computational physics student from Grand Island, are among 283 undergraduates to receive the award this year from a pool of 1,166 applicants.

Both say they want to use their knowledge to pursue research that improves society, advancing technologies in industries such as computing and medicine.

"These two scholars exemplify the very high caliber of UB students," said E. Bruce Pitman, dean of UB's College of Arts and Sciences. "As students, they have excelled in their coursework and research. More importantly, their career goals, in wanting to make a difference in the lives of others, reflect a core value of this university."

The Barry Goldwater Scholarship and Excellence in Education Program, established by Congress in 1986 in honor of Sen. Barry Goldwater, provides up to $7,500 per year to cover educational expenses of outstanding students pursuing careers in math, the natural sciences and engineering.

"It's significant that all of our nominees were recognized," says Elizabeth Colucci, senior assistant director of the UB Honors College. "Over the past five years, competition to be the UB nominees for the Goldwater program has significantly increased, reflecting the quality of our student body. This year, there were nine outstanding scholars who vied for UB's four spots."

Bearden and Michki's success is a point of pride for UB's physics department, which enrolled 33 new intended majors this fall, up from 14 in 2011 and 24 in 2012, according to the unit's figures. The department's undergraduate studies committee, headed by professor Bernard Weinstein, has led the push to recruit top students, provide advising and organize student activities.

About Sean Bearden: Bearden's love for math and science grew from conversations with a great uncle, a man Bearden described as a "kooky" physicist interested in concepts such as perpetual motion. As a result of these early chats, Bearden decided he wanted to gain a better understanding of how the world worked with the goal of verifying or refuting his uncle's wild ideas.

So in 2012, Bearden enrolled at UB to study physics and applied mathematics after earning an associate's degree from Ohio University. His talent and work ethic caught the attention of UB physics professor Igor Zutic, who invited Bearden to join the Zutic lab.

The two first met in Zutic's physics 301 class, in which Bearden was the only one of about 40 students who scored perfectly on a test assessing students' scientific background and mathematical preparation.

"From my first contact with Sean, I was very impressed by his knowledge and his analytical reasoning," Zutic said. "As I had graded most of the physics 301 homework myself, I quickly recognized an impressive originality in his solutions and that he was not deterred by the complexity of the assigned problems."

"Sean dislikes unsolved problems, and through his persistence and curiosity, does not give up until the solution is at hand," Zutic added. "His academic path was non-traditional and, as a transfer student with an associate's degree, he had to overcome many challenges coming to UB."

With Zutic as a mentor, Bearden has conducted research on "spin lasers," using a computer program to solve equations for modeling how these futuristic gadgets would work. The devices aim to manipulate spin - a quality of electrons - to reduce the electric current needed to create a highly focused laser beam, an advancement that could pave the way for more efficient data transfer in computers.

After graduating from UB, Bearden hopes to earn a Ph.D. in condensed matter physics, with the goal of teaching and researching at a university.

About Nigel Michki: Since entering UB in 2012, Michki has excelled in his computational physics program, which includes courses in both physics and computer science and engineering.

He has not pursued his studies single-mindedly, however. As a person of many interests, he has served as a mentor in the UB Graduate School of Education's gifted math program; renovated homes on Buffalo's west side as a volunteer with Westside Ministries Housing Development; and co-founded the Primer Project, which aims to create high school math tutorials and translate them for students whose first language is not English.

Michki says some of his favorite classes at UB have been outside his discipline, including an Honors College seminar titled "Apothecarial Adventures" that discussed the basics of pharmacy.

The pharmacy seminar sparked Michki's interest in using physics to study the biological systems that enable life, leading him to the lab of UB physics professor Andrea Markelz. There, he is building a device that will enable scientists to study the motion of proteins in solution - an area of research that could result in a better understanding of cellular systems, and new drugs for diseases.

As a scientist, Michki is "very positive and independent," Markelz says. "He does not get discouraged. A lot of other students would become overwhelmed with the kind of work he is doing, but he just seems impervious to that. He's always looking for a solution to problems."

After finishing his studies at UB, Michki hopes to apply his knowledge and persistent spirit to doing good in the world. His plans include earning a Ph.D. in biophysics and embarking on a career conducting research in that field.