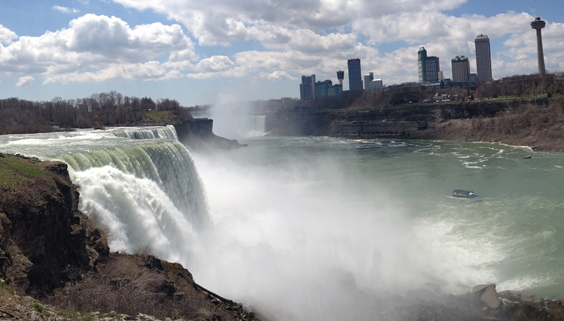 Niagara University, NY, March 2014 - It's been a long winter as we're almost halfway through the month of March and plenty of snow still covers the ground. Most students at Niagara University are visibly tired of the wintry weather. With spring just around the corner it's time to enjoy parts of the Niagara Falls and Lewiston area that aren't as accessible or enjoyable in the winter months. The closest and most popular destination for most NU students to celebrate spring is the Niagara Gorge just across the street from the university's campus. There are few things to do around the area that can be compared to the awesome beauty, and fun, that comes from hiking the gorge trails.

A popular destination for a lot of students come spring time is the Silo Restaurant in Lewiston, NY. The Silo Restaurant is well-known for their famous Haystack sandwich that was featured on Travel Channel's popular "Man V. Food". The delicious local delicacy is described on the Silo's menu as "Seasoned Ribeye steak with loads of melted mozzarella, piled high with toasted hash browns and served on a fresh baked hoagie roll. Served with mayo." If that doesn't make your mouth water, I don't know what will. Niagara University Senior Cole Bielecki shares his own thoughts, "I can't wait for the Silo to open. You know it's finally spring when you can go by the water and get a haystack." The Silo reopens every year in May and remains open until September.

On top of delicious eats and unforgettable views, spring at NU brings with it the school's annual concert; this year country star Rodney Atkins will be performing at the ever popular Artpark venue in Lewiston. The popularity of the country music genre at NU is evident, especially when asking students how they feel about the upcoming concert. When asked about the Rodney Atkins concert, senior Liz Gawronski had this to say, "I am really excited about it! It is going to be a great time, and it is a plus that they (NU) are providing a bus for us." The concert is set to take place on April 5 at 8 p.m. with transportation being provided for NU students. Tickets are already on sale in the Campus Activities office for $10 each, with students being allowed to purchase up to two tickets each according to the "NU Clue" email newsletter.

Niagara University's division one Hockey program had a successful season last year making it all the way to the NCAA tournament. This year they're finding similar postseason success as the team plays in the semifinals of the AHA championship at the Blue Cross Arena in Rochester, NY on Friday, March 21 and Saturday, March 22. The Purple Eagles will be facing Robert Morris on Friday at 7 p.m., and tickets to not only see the game, but also have transportation provided by the university will be available on Friday for only $5 in the Campus Activities office. Don't miss this chance to see the Niagara University Men's Hockey team possibly take the AHA championship and a run at the NCAA tournament!

Another major local attraction come the spring season are the Whirlpool Jet Boat Tours that run through the Niagara Gorge from spring until fall.  This awesome experience can be seen through pictures and videos on the company's website, http://www.whirlpooljet.com/page/home, along with information on where to get tickets to experience the thrill of riding on a jet boat through the Devil's Hole whirlpool. The experience is truly like nothing else you've ever done before. "I was hesitant about doing the Whirlpool Jet Boat Tours since I don't like boats or water" said Niagara Falls local, Alex Novak. "But after finally facing my fears, I had one of the best times of my life on the jet boat."

Much like the unparalleled experience of riding in a high-powered vehicle through a whirlpool, there's another unforgettable and irreplaceable sight of nature very nearby that people come from all over the country to see. One of the seven natural wonders of the world and the namesake for the city in which it can be found, the Niagara Falls are a beautiful force of nature no further than a five-minute drive from Niagara University's campus. The park surrounding the Niagara Falls is a great place to spend a day in the spring weather, whether that means having a picnic, grilling out, exploring the park, or even just enjoying the magnificence of the raging waters of the Niagara River as they turn into the Niagara Falls. When asked about the Niagara Falls, Niagara University freshman Alyssa Sturmer states her own opinion, "I love taking a break from my school work to enjoy the beauty of the falls. Somehow seeing them makes me less stressed out about my schoolwork."  Students who have never seen the sight will not be disappointed.  Just a little more sun and warmer temperatures and it will be more than just the calendar that feels like spring.