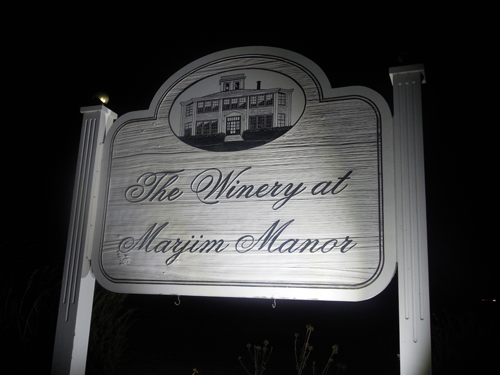 Just outside the speakeasy "Under the Falls," a gruesome murder has taken place while inside, the mystery of "Who Bounced the Bouncer" begins to unfold among a cast of colorful characters.

Was it gangster K. Medgar Cooper, bootlegging pilot Lindy Charles or barfly Cal Apone? Bandleader, Dewey Legstrong may also have a motive along with the speakeasy owner herself, washed-up actress Sharlene Shaplin. Reporter Bernie Styles quickly enters the scene to collect evidence while Mayor Harding Warren shamelessly works the crowd for votes in the upcoming election.

On Saturday, March 8, in a very elegant Victorian-style room of The Winery at Marjim Manor, a 9,500-square-foot mansion, a talented cast of seven carried on a lively and entertaining performance, actively engaging their audience. Throughout the evening, guests enjoyed a delicious four-course wine and food pairing dinner while trying to solve a perplexing murder mystery.

"Benny the Bouncer," a fellow with a seemingly questionable character, has been fatally stabbed in the back and several suspects have plausible motives. While the play carries on, the audience has the opportunity to study the clue cards at their tables and engage in small talk with the suspects as they walk through the crowd.

The Manor's owner and operator, Margo Sue Bittner, writes all of the mysteries herself. Bittner believes that creative writing is "in the family," as the great niece of the late Studs Terkel, an American author, radio broadcaster, actor and historian.

Aside from the dinner theaters performed at Marjim Manor, this 19th century mansion has its own mysteries. In its almost 200 year history, Marjim Manor has been a private residence and farmhouse, a summer camp and retreat, a farm school and is now owned and operated by Bittner, as a local winery.

While Bittner pours the wine for her guests, she shares animated accounts of mysterious footsteps and strange happenings in the mansion. She speaks of lights and radios turning themselves on with no one in sight and tells stories of various deaths in the home, which have often been eerily associated with Thursdays at 3 p.m. With her lively charm and sparkling eyes, Bittner captures her audience's attention, leaving behind a feeling of mystery and intrigue.

From an assortment of fruit wines to white, red and blush wines, the Winery at Marjim Manor is sure to please connoisseurs with the most discriminating taste.

To find out more about the Winery at Marjim Manor and upcoming events, contact Margo Sue Bittner at 716-778-7001, visit their website at http://www.marjimmanor.com, or stop by for a glass of wine and a ghost story at 7171 E. Lake Road (Route 18), Appleton.

You are sure to have a hauntingly good time!