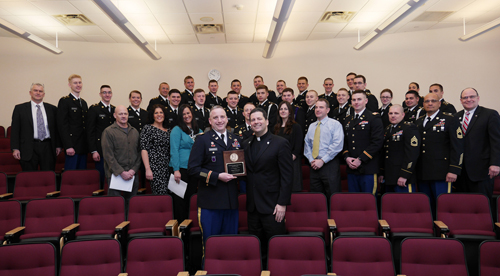 Niagara University's ROTC program was presented with the prestigious MacArthur Award Monday morning in recognition of its cadets' performance during the 2012-13 school year.

Only eight schools are chosen from among the 273 senior ROTC units nationwide for the MacArthur Award, which is based on a combination of the achievement of the school's commissioning mission and its cadets' performance and standing on the Cadet Command's National Order of Merit List, and its cadet retention rate.

In congratulating the cadets, Maher said, "You signify the commitment to the discipline of excellence and that itself is an excellent Vincentian value and virtue that we need to build even more deeply into our university community. You've taken the core of the discipline of this program and you've applied it in life. That's the essence of university and collegiate education, where we take knowledge, we learn, we grow and we apply it."

Presented by the U.S. Army Cadet Command and the Gen. Douglas MacArthur Foundation, the honor acknowledges the ideals of "duty, honor and country," as advocated by MacArthur.

Cadet Command and the MacArthur Foundation have given the awards each year since 1989.

"You don't directly compete one brigade against another for best in the nation," Anderson said, "but I bet if you did, given the stats put up by this group, this would be the best ROTC program in the entire nation. I think that's something to be proud of."

Since its re-establishment as a host ROTC program in 1999, the Niagara University Purple Eagle Battalion has been recognized as the No. 1 program in the nation (2004) and previously earned the MacArthur Award in 2008.

"We are humbled to be selected for this prestigious honor, which is truly a testament to the values, dedication and commitment of our cadets and the support of the entire university community," noted Lt. Col. Paul Dansereau, professor of military science. "This really reinforces Niagara University's status as a premier preparatory institution for Army ROTC cadets."

As part of the event, certificates of appreciation and commemorative military coins were presented to Maher; Dr. Timothy Downs, vice president for academic affairs; and Dr. Tim Ireland, dean of the College of Arts and Sciences.