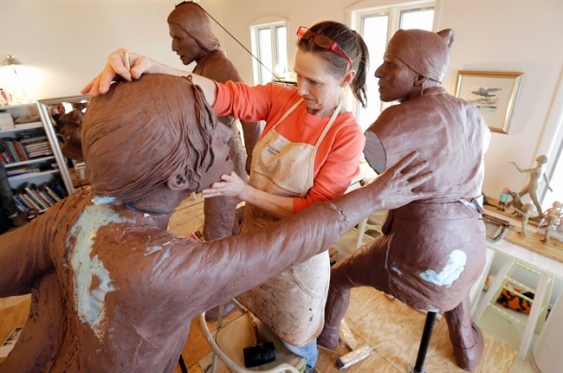 The Castellani Art Museum of Niagara University's popular "Meet Me at the CAM" programs are back this spring with a diverse lineup of presentations. Sculptor Susan Geissler will open the season Wednesday, March 26, from 10 a.m.-noon, with a talk on "The Bronze Casting Process." Geissler will show what she jokingly refers to as "the 13 easy steps from clay modeling to a monumental bronze sculpture."

Geissler, a nationally known sculptor, will review the conceptualization, creation and production of the Tuscarora Heroes monument in Lewiston.

A graduate of Lewiston-Porter High School and Niagara County Community College, Geissler has been commissioned for 33 pieces of public or monumental sculpture. Her work is installed in Disney World; the cities of Sioux Falls, S.D.; Sheridan, Wyo.; Fountain Hills, Ariz.; Columbus, Ga.; Oklahoma City, Okla.; and many other locations across the U.S. and Canada. Geissler will be joined by her husband and business manager, Peter Henderson, for this in-depth presentation on a fascinating process.

On Wednesday, April 16, Robert Poczik will present "Dream Windows: An Exploration of the Japanese Garden." Poczik writes, "Who among us has not been entranced by the simple beauty and tranquility of a Japanese garden? Some of us have been fortunate enough to travel to Japan and experience those gardens in person. At this session, participants will come to understand some of the principles that underlay Japanese garden design."

The session will feature a slideshow that highlights several exquisite gardens in Kyoto through photographs taken by Poczik on his journeys. The session will also include views of four Japanese gardens outside Japan: in Philadelphia, Vancouver, Seattle and Buffalo.

Women contributed to Athenian society by working in its private sphere behind the scenes, but their work was depicted on both black-figure and red-figure pottery. Though the work of women was performed in the private sphere, there was a public interest and a market for pottery depicting women working, especially with wool.

The hetairai (courtesans) who took on wool-work were known as the "spinning hetairai." There is a common thread between wives and hetairai in a sophisticated package depicting these women taking on a virtuous task. This talk attempts to answer questions such as: how does one distinguish an Athenian wife from the hetaira? And why did the hetairai take an interest in wool-work?

"Meet Me at the CAM" programs run from 10 a.m.-noon and feature films, guest speakers and facilitated discussions. Each session starts with coffee, tea and home-baked cookies and pastries. Participants enjoy the chance to socialize with old and new friends.

Castellani Art Museum members are entitled to attend all eight programs for free. Admission is $5 for non-members. Membership sign-up is available at the registration table at each lecture. To register, call Susan Clements at 716-286-8201.