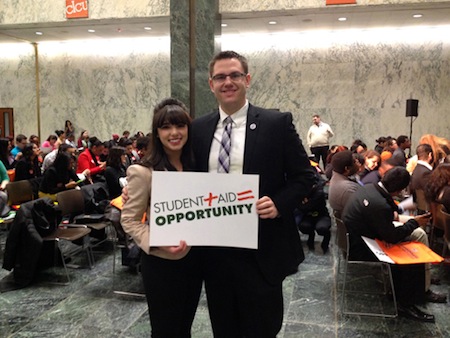 Last week, the Niagara University Student Government Association representatives, clad in their Sunday best, slipped out of a day of classes - OK, that part wasn't that bad - to traverse 300 miles to the state Capitol in Albany in hopes of bending the ears of lawmakers who control funding for the Tuition Assistance Program, Pell grants, Bundy Aid and other forms of financial assistance.

NU annually enlists a handful of students to participate in the New York Student Aid Alliance Advocacy Day, an initiative coordinated by the Commission on Independent Colleges and Universities. This year, only Nadler and Faricellie were available to advocate for the value of state student aid programs.

This comes at a time when the importance of state aid may be more pronounced than ever. Approximately 46 percent of Niagara University students receive TAP with an average award size of about $2,100. Statewide, half of New Yorkers attending college as full-time undergraduates use TAP funds to help meet their college expenses.

At the same time, more than 35 percent of Niagara University students are eligible for a Pell Grant, reserved for families with less than $30,000 in annual income.

Those figures headed the list of reasons Nadler, the NUSGA president, volunteered to make the expedition downstate. He and Faricellie are TAP beneficiaries.

"Serving as student government president, it was a great opportunity for me to bring my advocacy efforts to Albany. I was able to lobby members of both houses on the importance of TAP and other state aid to Niagara University students," noted the senior political science major from New Rochelle. "As a member of the Niagara University community, I was able to show many legislators that this (financial aid) is something that our university strongly believes in. Niagara is a university that truly cares about its students, and state aid is a great way to ensure that students will be able to experience the excellent experience that is Niagara University for years to come."

Upon arriving at the Capitol, Nadler, Faricellie, Mary Borgognoni, associate vice president for academic affairs, and Michael Freedman, associate director of public relations, convened with hundreds of students, faculty and staff from more than 45 colleges and universities. The kickoff program included remarks from aid recipients as well as political proponents such as cIcu president Laura Anglin and Assemblywoman Deborah Glick, chair of the committee on higher education.

"I am thrilled to see so many students who have come to the Capitol to make their voices heard and stand up for student financial aid," Glick said from a podium in the Legislative Office Building. "You must also raise your voices in your own communities so that your legislators know how important these programs are. Keep up your visibility and we'll keep up our end of the bargain."

TAP, New York's largest grant program, helps eligible New York residents attending in-state postsecondary institutions pay for tuition. Depending on the academic year in which the student begins study, an annual TAP award can be up to $5,000, depending on the applicant's and his/her family's taxable state income. Because TAP is a grant, it does not have to be paid back.

While Gov. Andrew Cuomo's preliminary budget did not propose any new cuts to TAP, sustaining current levels of undergraduate financial aid is a considered a win to many, particularly in these unsettled economic times.

Meanwhile, Bundy Aid, named after the Bundy Commission that instated it, provides direct unrestricted financial support to independent postsecondary institutions in New York. Presently, Niagara receives an estimated $350,000 annually in Bundy appropriations, all of which is used to support student financial aid.

NU issued more than $36 million in federal, state and institutional financial aid in 2012-13.

Faricellie called her first trip to the Capitol and meeting with state legislators the "opportunity of a lifetime."

"From exploring the beautiful architecture of the Capitol to listening in on how the Assembly discusses important issues, I am eternally grateful for this opportunity," remarked the East Amherst native studying business at NU. "Throughout my time at the Capitol, I learned a lot, made significant connections and, by sharing my story, I feel that I have made a difference. This experience has been eye-opening, insightful and truly inspirational. I would encourage any student that is given this amazing opportunity to participate and share your story!"