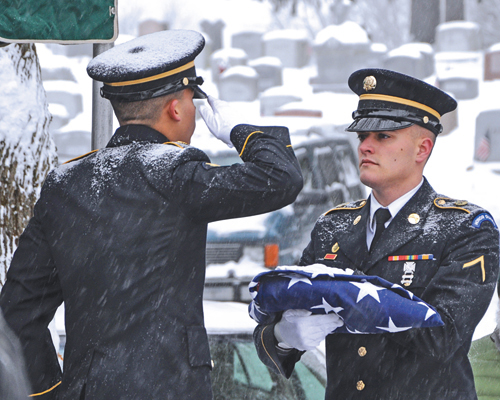 The New York Army and Air National Guard expected to have provided military funeral services to more than 11,560 families in 2013 by the time New Year's Eve revelers welcomed the start of 2014.

For the Army Guard team, this is slightly less than the 10,175 funerals the New York Military Forces Honor Guard conducted in 2012, and well below the peak of 10,752 military funerals conducted in 2011.

This decline is not unexpected as the World War II generation, with its millions of service members, ages and dies, said Chief Warrant Officer Ryan Comstock, the honor guard officer-in-charge.

The New York Air National Guard's honor guards have participated in 1,538 funerals so far this year. The five air wings based at Westhampton Beach, Newburg, Scotia, Syracuse and Niagara Falls and the Eastern Air Defense Sector in Rome expected to conduct at least 30 more funerals before the end of 2013.

Since 2000, federal law has mandated that any military veteran who did not receive a dishonorable discharge from the armed forces is eligible for military honors at his or her funeral. The ceremony includes the folding and presenting of the flag of the United States to the veteran's survivors and the playing of taps.

The New York Army National Guard Honor Guard employs 35 soldiers on a full-time basis to man the funeral details and calls upon 135 other soldiers on an as-needed basis to help, Comstock said. They operate from eight regional offices. About a third of the honor guard soldiers are women.

"This is a great privilege," said Vanderbogart, who has provided services at more than 150 funerals since he joined the honor guard in May 2013.

At least two members of the armed forces must be present for the ceremony. Federal law requires that at least one of the service members at a veteran's funeral must be from the deceased veteran's service.

Veterans who served for 20 years or more and retired from the military, those who received certain medals for heroism for their service, general officers, and soldiers who have died in combat receive more elaborate services.

The New York Honor Guard has been performing more than 10,000 funerals annually since the federal law in 2000 mandating military funerals for veterans.

New York is home to 943,000 veterans, according to the most recent Department of Veterans Affairs statistics from late 2012. Of those veterans, more than 300,000 are age 65 and older.

Originally the bulk of the veterans being buried by the honor guard were from the World War II generation, Comstock said. Now that is starting to shift to those who served in the Korean War (1950 to 1953) and the families of more and more Vietnam era veterans are asking for services, he said.

The New York Army National Guard Military Forces Honor Guard was launched in 1999 as a state-funded effort. Since 2000, the federal government has funded the program, with some state financial support in the past.

The New York Honor Guard normally provides services at the funeral of Army veterans, historically the largest of the services, but can provide services for any veteran if the veteran's service cannot provide a detail.

Funeral home directors are responsible for contacting one of the honor guard's local offices when a deceased veteran's family requests military funeral honors. Families are asked to provide proof of the deceased service, normally the Department of Defense Form 214 (known as a DD214), which service members receive when they leave the military, or an honorable or general discharge certificate.

One of the most critical moments at any military funeral is the playing of taps, the Civil War-era bugle call that has signified a dignified end to a service member's life since then.

Taps at more than 90 percent of the funerals the New York military forces conducted each year is played on a ceremonial or electronic bugle, Comstock said. This is a bugle with an electronic device inside which plays the tune, although live human buglers are used when appropriate.